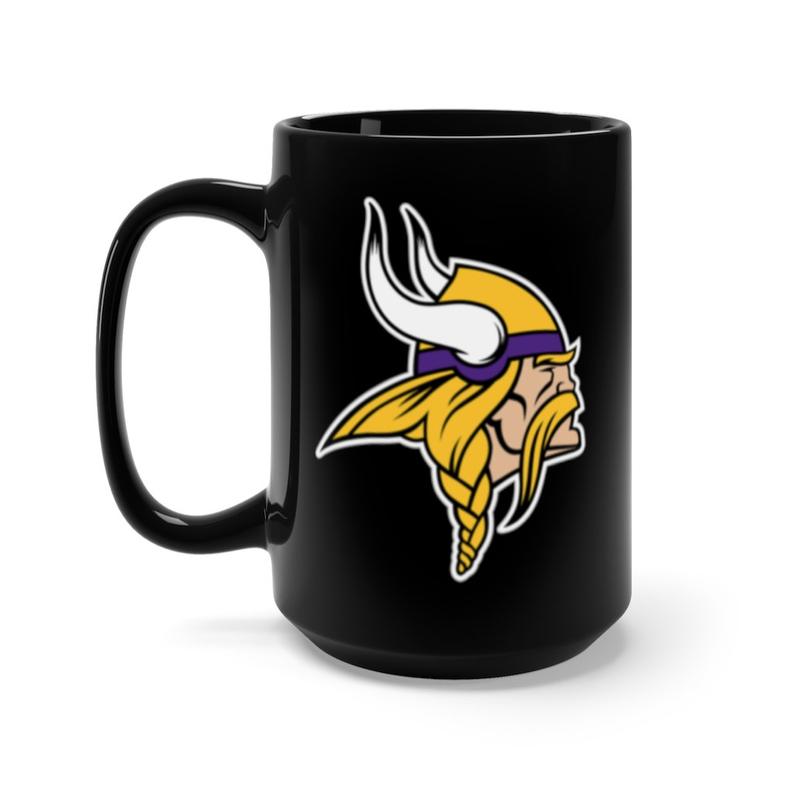 Chuck Foreman played in three Super Bowls. He knows what the Chiefs and Buccaneers are feeling this morning.

“Every player understands how big this game is,” Foreman told me earlier in the week. “You’re a little bit scared. You want to make sure you did everything you could to prepare which means knowing your assignments in every situation. Once the game kicks off, all the hoopla fades and you just play football.”

It was December 2, 1972, in Gainesville, Florida. The sun was setting, the wind was blowing and it was cold. If you were a University of Miami football player or fan, there was nothing good about that afternoon.

The University of Florida just beat Miami 17-6, ensuring another losing season for the ‘Canes. The Miami team bus was sitting next to the stadium waiting for everyone to board before heading to the airport. I was in my junior year and the sports editor of The Hurricane, the Miami campus newspaper. We traveled with the team to every game. I sat in a seat close to the front of the bus, next to the window. 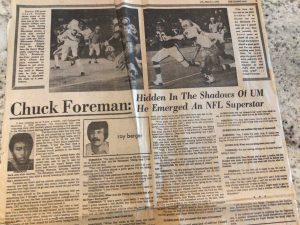 From the Miami Hurricane many moons ago.

Foreman got on and asked if anyone was sitting next to me. He took the vacant seat and we started chatting, which wasn’t unusual. For me, if I ever got into a copy bind, Chuck was one of my go-to-guys. Forty-eight years later, nothing’s changed.

He was deflated. His Miami career just ended, and he questioned what the pro scouts thought his NFL future might be. He never questioned his ability; only what others thought of him. The year before, Foreman was an All-American running back rushing for almost 1,000 yards. His senior year the Miami coaching staff switched him to wide receiver, thinking that suited him best. Even though his workload increased catching 37 passes for 557 yards and rushing for almost 500 more, the big question was what would the NFL think of him and in what role? That was soon answered.

Three weeks after the Miami season ended, Foreman, as a running back was chosen the Most Valuable Player of the North-South Shrine game, a college all-star event. A week later, the same honor in the Senior Bowl featuring pro prospects all over the field.

The Minnesota Vikings had no question about the 22-year-old Foreman’s skills. They selected him 12th in the 1973 NFL draft, eleven spots after Houston chose defensive end John Matuszak of the University of Tampa with the first pick, and one before Chuck’s Miami teammate Burgess Owens who went 13th to the Jets as a safety.

“The NFL draft was a lot different back then,” Foreman laughed. “I got a phone call in my apartment in Miami from the Vikings that they just chose me. They told me to be on a plane the next day and come up to Minneapolis for a press conference.

“It’s funny but the Vikings weren’t sure what to do with me,” Foreman remembered. “When I got there the coaching staff asked me what position I wanted to play — running back, wide receiver or cornerback?”

Head coach Bud Grant made the 6’2”, 210- pound Foreman the featured back in the 1973 Vikings offense. He learned the position on the fly from veteran running backs Dave Osborn, Bill Brown and Oscar Reed. “They all shared their knowledge and mentored me even though I was there to take their jobs,” Foreman said. On opening day, he rushed for 26 yards and caught six passes for 53 more including a nine-yard touchdown toss from Fran Tarkenton in the Vikings 24-16 win over the Raiders. His career was off and running. Literally.

There was never a doubt again whether Chuck Foreman had what it took to play in the NFL. He finished the ‘73 season with 800 yards rushing, 360 receiving, six touchdowns and not only was named to the Pro Bowl by his peers but was selected the NFL Offensive Rookie of the Year. His presence and the ferocious Minnesota ‘Purple People Eaters’ defense were key to the Vikings finishing the season at 12-2, beating Washington and Dallas in the playoffs to win the NFC championship and a Super Bowl date with the defending champion Dolphins.

“By far they were the best team in the three Super Bowls I played,” Foreman said. He traded his #32 jersey with the U to wear #44 with Vikes in homage to two of his heroes —  football’s Leroy Kelly and baseball’s Hank Aaron. Miami beat the Vikings 24-7 for back-to-backs. “They were dialed-in, totally mistake free. They didn’t give us much,” he recalled.

Foreman, coming off his banner rookie season, virtually disappeared against Miami in the Super Bowl. He had 12 touches, seven rushes and five receptions for a combined 45 yards. He still questions the Vikings’ game plan.

“It seemed to me that everything we did the entire season to get to the Super Bowl we changed up for that one game,” Chuck, now 70, remembered. “It’s just my opinion, but everyone knew if you stopped me, you pretty much stopped our offense. The Dolphins were going to key on me, so we changed things up to take the attention away from me and we were flat.”

Foreman’s sophomore season in 1974 was just as exceptional as his rookie campaign: 800 yards rushing, 600 receiving and 15 touchdowns. The Vikings finished the regular season at 10-4 and defended their NFC championship with playoff wins over the Cardinals and Rams earning them a ticket back to the Super Bowl in New Orleans, this time against the Steelers.

Pittsburgh prevailed 16-6. “There was no doubt in my mind we should have won that game,” Foreman said from his Eden Prairie, MN, living room. “I thought we were the better team, much better in fact, but we just couldn’t get the ball in the end zone.”

Pittsburgh’s vaunted Steel Curtain defense shut down the Vikings. What little offense Minnesota produced was virtually all Foreman. He rushed for 18 yards, Minnesota’s total on the day. He caught five passes for 50 yards, half the Vikings’ air production. All Minnesota could manage was a blocked punt, recovered for a touchdown. They turned the ball over five times, not a recipe for victory. 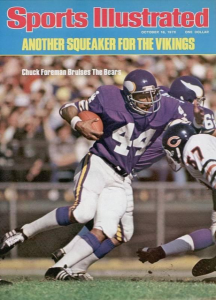 Foreman, known as the ‘Spin Doctor’ for his cuts and slashes while he carried the football, ran for 1,070 yards in 1975 to become the first Viking ever to rush for four digits. He captured another 700 receiving with 22 touchdowns and was selected first team All-Pro. His 73 receptions led the league. Unfortunately, it wasn’t enough to get Minnesota back to its third straight Super Bowl, eliminated by Dallas on the famed Roger Staubach to Drew Pearson ‘Hail Mary’ pass in the closing seconds.

Growing up in Rockville, MD, Foreman was a better high school basketball player than football star. In fact, he got more basketball scholarship offers than football. He liked football better and was recruited heavily by Miami, Syracuse and, if he chose to stay in-state, Maryland. Not only did his recruiting visit to Miami, with palm trees, bikinis and the winter warmth, clinch the deal, Miami also told him he could play basketball which he did his freshman year before concentrating on football. As a kid he idolized the NBA Baltimore Bullets and guard Earl ‘The Pearl’ Monroe and the Pearl’s many moves on the court. Foreman’s twirls and slashes carrying the football were born mimicking Monroe’s basketball antics.

The Vikings rebounded in 1976 behind Foreman’s career best 1,155 yards rushing and another 600 receiving. They finished the regular season at 11-2-1; beat old friends Washington and the Rams in the playoffs, earning a spot in Super Bowl XI against the John Madden coached Raiders in Pasadena, CA. That day, Foreman’s 106 all-purpose yards weren’t enough as Oakland ran away to a 32-14 win for Minnesota’s third Super Bowl loss in four years.

“I don’t know what it was when we got to the Super Bowl,” Foreman lamented. “Miami was good, no doubt about it, but against Pittsburgh and Oakland we left a bunch of chances on the field. We just never seemed to play up to our ability. There was no way I thought we’d lose all three games.”

Minnesota’s loss to the Raiders was the last time the Vikings were in the Super Bowl. They are 0-4 all-time including Super Bowl IV, a loss to Kansas City in 1970. 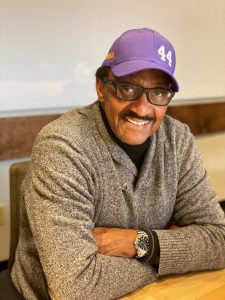 Foreman’s career ended four years later. He retired with eight years in the NFL: seven as a Viking and his last year, 1980, in New England. He rushed for just under 6,000 yards, had another 3,000 receiving and 76 TDs back in the day when the regular season was only 14 games; two less than today’s modern game which has inflated statistics. He was in three Super Bowls and five Pro Bowls. He was selected as one of the 50 greatest Vikings of all-time and his name hangs on the Minnesota Ring of Honor. Not bad for a guy who questioned whether or not the NFL thought he was good enough.

“Listen,” Foreman, whose son Jay was a linebacker with Buffalo, Houston, San Francisco and the Giants from 1999-2006, said sternly. “I’m not consumed by not winning a Super Bowl or not being in the Hall of Fame. Sure, they both would have been nice but there is nothing I can do about it now. Winning a Super Bowl or being in the Hall doesn’t define you as a person; instead, it describes you.

“Win a Super Bowl or be inducted into the Hall of Fame and people use ‘Super Bowl’ champion or ‘Hall of Famer’ when introducing or talking about you,” Foreman, who these days uses his Miami education degree as a part time high school teacher in the Twin Cities as well as the host of a weekly radio show, continued. “I think if we had won one of the Super Bowls maybe the Hall of Fame would have happened. I believe I was the most versatile running back in the game when I played. All I could do was what I did.  I had no control over anything else.”

So, based upon his Super Bowl experience, what advice would he give to the Chiefs and Buccaneers this evening?

“Win,” Foreman chuckled. “If you lose you go home as just another team that wasn’t good enough. Believe me, I know.”