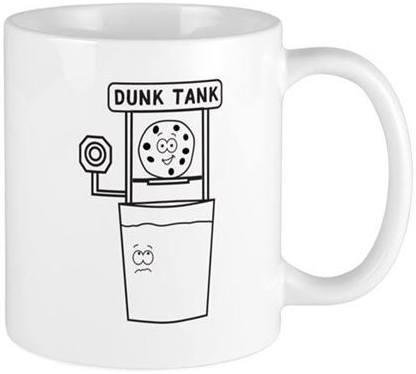 Some leftovers from Super Sunday and other crumbs to dunk in your morning coffee:

In a ‘down’ tourism year Nevada sports books won $12,574,125 on the Super Bowl. For the books it was the perfect storm of the underdog and the ‘under’ covering.  I loved Kansas City and the over, still do, and made my biggest wager of the season on the favorites.  Some of those last four digits of the books’ win were mine. I hate when that happens.

Kudos to Sarah Thomas for being the first woman on-field official in the Super Bowl.  I first became aware of Ms. Thomas in 2006 when she was officiating UAB games in Birmingham for Conference USA.  It was a short drive from her Mississippi home and the league was a good entry point to see if she had what it takes in Division 1 ball. She did. 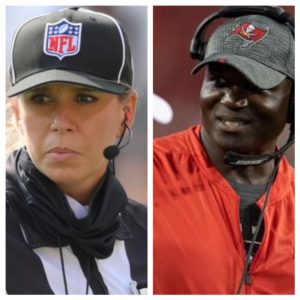 Sarah Thomas (l) and Todd Bowles both had a super Sunday.

Ms. Thomas was poised on the field and invisible except for the blonde ponytail out the back of her cap. She earned her stripes.  Literally. Sarah climbed the ladder quickly and the Super Bowl gig at age 47 was no accident. However, not to take anything away from her credentials, nor her ethics, I’m surprised KC naysayers didn’t make more out of her oldest son being named Brady after you-know-who.

To be a bonafide Jets fan you need at least an undergraduate degree in cynicism. For those who have been around since we last won in ‘69, a master’s or a doctorate is more the norm.  It would be easy to look at Tampa Bay defensive coordinator Todd Bowles, who as the Jets head coach from 2015-18 went 24-40, and say ‘sure, now that he is away from New York he wins.’  Bowles called the perfect game for the Bucs against Patrick Mahomes. Nobody holds the Chiefs without a touchdown, but the Bowles defense did for 60 minutes.  If nothing else, it shows how consistently inept the Jets are from ownership to executive management to the scouting department in not providing the resources a head coach needs to be successful.

A meaningless under the radar stat in a one-sided game was Kansas City out-gaining Tampa Bay 350-340 total yards, a good many of those against a prevent defense.

There is no truth to the rumor that circulated on Super Sunday that the fourth quarter streaker was Bill Belichick.

Alabama has 55 players on NFL rosters.  Notre Dame has 33.  There wasn’t one from either school playing for KC or Tampa Bay.

For Super Bowl wins, there is no denying that Tom Brady is the GOAT. Times change. When we were kids, calling someone a goat in a ballgame meant they totally screwed up.

Moving over to the hardwood of the NBA, I love the league’s new rule that players are not allowed to give their opponents a post-game hug.  These guys have been breathing, drooling and spitting on each other for 48 minutes without masks, but please avoid any post-game love taps.

Gregg Popovich has been the head coach of the San Antonio Spurs since 1996. He is the longest tenured coach in all of American professional sports.  In that same timeframe, the New York Knicks have had 15 head guys. Again, like the Jets, it all reverts back to the organization.

Last weekend a few of you asked if Pebble Beach PGA champion Daniel Berger was kin.  No, only our games are similar.

The pandemic was beneficial to recreational golf. Over 60 million more rounds were played in 2020 from the previous year, an increase of 14%.

And as long as we are on the course, I went to the west coast of Florida last month to play in a golf event with 15 friends from my Pirates baseball camp.  There are two places in the world where COVID doesn’t exist— North Korea and Bradenton, Florida.  It was unnerving to see the recklessness of both patrons and proprietors in area bars and restaurants.

Sometimes a sunny day and a golf course don’t mix.  Ask the NHL who built an ice rink on the 18th fairway of the Edgewood Tahoe Resort on the Nevada side of Lake Tahoe for Saturday’s Vegas-Colorado made-for-TV hockey outdoor event.  It was a gorgeous setting except for one thing—the temps were above freezing, and the sun was shining causing the ice to melt in spots and become unplayable after the first period.  The game was delayed eight hours until nighttime and temps in the 20’s.  The League will try again late this afternoon at the same site when Boston and Philadelphia give it a go.  Here’s hoping for clouds and chill.

The Vegas Strip got some good news this week when MGM Resorts announced they will reopen The Mirage, Park MGM and Mandalay Bay to 24/7 operations effective March 3. Advance bookings indicate a spring/summer rebound.

No doubt it’s hard to believe in most areas of the country, but baseball is in the air.  The Westgate Hotel, nee the former Las Vegas Hilton Superbook, has posted its World Series odds and season win totals. 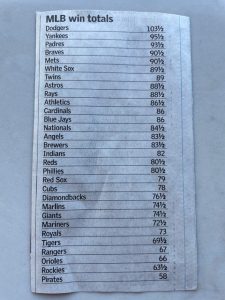 Baseball win futures from the Westgate.

The Dodgers are an overwhelming and no value 2-1 to repeat as Series champs.  The Yankees, the American League favorites, have a little more meat on the bone at 6-1 to win it all for the first time since 2009.  Over/under on the season win totals for a 162-game schedule have the Dodgers at 103.5 and the Yankees at 95.5. Here’s something that has never been said in one sentence before:  the Padres and Mets will be fun to watch. The Padres, who have to beat the Dodgers in the NL West, are at 93.5 season wins and the Mets at 90.5.  Expect a long summer in Pittsburgh—the Pirates win total of 58 brings up the rear.

Fellow Yankee fans please don’t judge me for this, but I was sad to see the Red Sox’ Dustin Pedroia retire from the game.  Knee injuries ended his 14-year career.  The second baseman finished with a .299 lifetime batting average and two personally distasteful World Championships.  I loved the grit with which he played the game.  Reminded me of Pete Rose back in the day.

You don’t have to be a hockey fan to know the names Gordie Howe and Mark Messier.  For the next couple of months, they will be one-two in the number of career NHL games played— Howe with 1767 and Mess 1756.  Soon, a non-household hockey name will pass them.  Last night Patrick Marleau of the San Jose Sharks played in his 1738 game.  Barring injury, he will become the all-time games played leader sometime in April. Maybe even more impressive is that he’s played 869 games in a row, in what is the physically most demanding of all professional sports.  Marleau, who suited-up for his first NHL game in 1997, presently holds one hockey distinction he’d rather not — most games played and never winning the Stanley Cup.  That dubious honor will not be broken this season.

A kid growing up in my era in New York remembers Sonny Fox of Wonderama on Channel 5. He was our local Mr. Rogers. Sonny died last month at 95.

Just finished Your Honor, a ten-parter on Showtime with Bryan Cranston.  Terrific.

Leon Spinks, 67, passed away on February 5 here in Vegas after a long tussle with cancer.  One wonderful, unpredictable night in 1978 against Muhammad Ali made Spinks a boxing immortal: a world heavyweight champion in only his eighth professional fight. 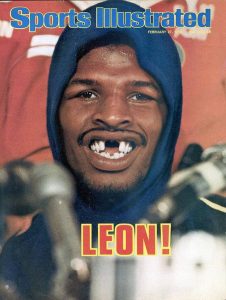 That was as good as life got for Leon who, in many ways, became a tragicomedy character. Nobody took him seriously.  He was stripped of the title seven months later because he fought Ali in a rematch instead of a mandatory title defense against Ken Norton. Ali won easily.  Spinks got one more shot against Larry Holmes in 1981, but that ended early with a third round TKO. He died of advanced prostate cancer. Spinks had a rough go of things over the last decade after being diagnosed in 2012 with shrinkage of the brain. I smile every time I see Leon’s gap-toothed Sports Illustrated portrait.

Here’s bureaucratic efficiency at its very best or maybe very worst: My wife hasn’t lived in the Commonwealth of Kentucky since 1982.  Yesterday, Andi got a letter at our Nevada address on Commonwealth letterhead informing her she was eligible to apply for weekly Kentucky pandemic unemployment relief of $569 a week.  The bad news?  She is only eligible for 50 weeks.

I guess I’ve been away from Alabama longer than I thought.  I had no idea, until I saw it on last weekend’s Daytona 500 telecast, that Michael Jordan was now part owner of a NASCAR team with Denny Hamlin.  And driving that very familiar #23 car is Bubba Wallace.

That loud screech you just heard were the presses shutting down on those Cuomo 2024 bumper stickers.

There is something wrong about having to pay income tax on Social Security benefits.

There is also something wrong, after all these years, in not being able to carry a bottle of water through airport TSA.  I’m guessing the lobby for HW Smith and similar airport stores, at $4 a bottle, will have it no other way.

NY travel public relations guru Geoffrey Weill predicts: “Maybe the most obscure change we’ll see in post-pandemic travel is people reluctant to stay in hotel rooms whose windows don’t open. I believe people will be leery about breathing processed instead of fresh air which may become a nightmare to the zillion hotels with sealed windows.  There has been little talk of it yet, but I believe it will be major.”  Weill’s new book, All Abroad, is now available on Amazon.

Marriott Hotels CEO Arne Sorensen died earlier this week from pancreatic cancer at the young age of 62.  Mr. Sorenson had an aggressive acquisition philosophy that changed the face of the hotel industry worldwide.

Ending this week a little differently with a plea on behalf of a longtime colleague, Ron Lonicki, now living in San Diego.  Ron needs a kidney donor and asked me to list his email address- RLonicki@yahoo.com- for any Sunday Morning Coffee readers who can offer guidance, assistance or advice in Mr. Lonicki’s quest for a life-changing transplant.  Happy to do it, Ronnie.

Close your eyes. Imagine last week’s frigid temps never happened.  Listen to the crack of the bat.  The ball thumping into the leather catcher’s mitt. Spring training opened this weekend.  Feel the warmth.