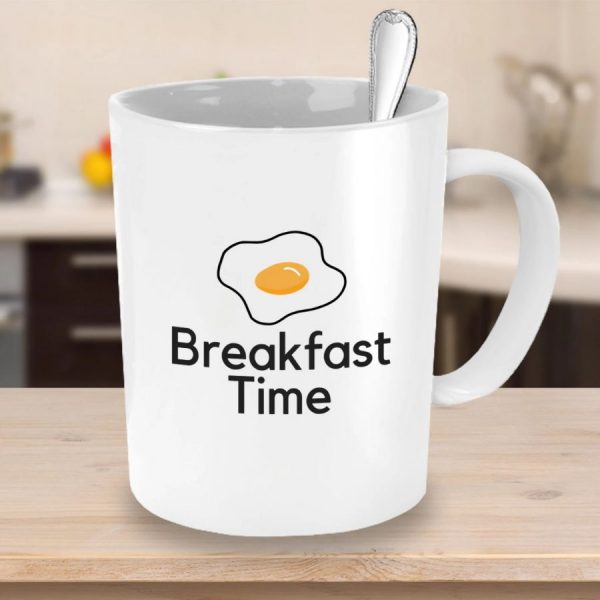 Monday night is a big night for us. Finally, after living here for three and a half years, tomorrow Andi and I become naturalized as Las Vegas residents. First, as my great grandparents did over a century ago from Denmark, we will cross onto Ellis Island. No, not the one in New York Harbor but the one a block east of the Las Vegas Strip on Koval. We have no official paperwork to be processed, but there are baby back ribs to be eaten at the Ellis Island Hotel, Casino and Brewery. I’m told it’s the best this side of Tony Roma’s. We’ll see about that. Then, after an ample supply of wet-naps, an hour or so later our official induction as residents will happen at the venerable Flamingo Hotel.

We won’t see an immigration officer, but instead we’ll do what all Las Vegans have to do: see Wayne Newton. It will be the first time for both of us; I can’t imagine why there will ever be a second. Newton first appeared in the Flamingo showroom in 1963, when Andi was a year old. These days the hotel is as old and tired as Mr. Newton’s act. When I broke the news about our week-late Valentine’s date, I can’t say Andi ran right up and gave me a hug. Begrudgingly she said okay. I told her the guy has three songs; a 7 pm show should end by 7:18, and she can Danke Schoen me when we get home. Yes, I’m a heck of a guy. 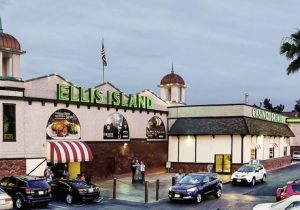 Not quite the same Ellis Island that welcomed my great grandparents to this country.

This spring and summer will be the seasons of concerts for us. Why not? They’re plentiful out here and we can still get around unaided, be home by 10, so no reason not to take advantage. We have a pretty ambitious schedule. I’ve learned to avoid stadium and arena shows and only go to hotel/casino showrooms. In a hotel setting you can be assured if a show is scheduled to start at 7 or 8, they’ll begin no later than 7:05 or 8:05 as the host hotel wants to get you in and out early enough to spend some time on the casino floor. A stadium/arena concert won’t start for at least 45 minutes to an hour after posted time with no rush to finish. Hotels are a much more civil, controlled and managed environment, too. We’ll spend our dollars in smaller 2-3,000 seat venues starting this afternoon with the touring Broadway production of The Band’s Visit. Also on our upcoming calendar once we get past Wayne tomorrow are: Foreigner, Sting, Carrie Underwood, The Steve Miller Band, The Who, Lady Gaga’s Jazz and Piano show and a to-be-rescheduled date with Adele. I’ll also get my oldies fix with Paul Anka and the 60s Happy Together tour. I know, it’s not the Kingston Trio, but for now it’s the best I can do. However, I draw the line at any show that starts later than 8 pm, and Barry Manilow.

I didn’t believe it when I first read it but it’s true. Sunday was the first time since 2009 that the Super Bowl betting favorite won the game and didn’t cover the point spread. The Rams were a four point choice at kickoff and won by three. The last time was 13 years ago when the Steelers were a seven point pick over Arizona and won by four.

And what a difference a year makes if you are Cincinnati Bengals head coach Zac Taylor. Entering this season the Bengals were 6-25-1 in two seasons under Taylor’s charge. Street talk said another sub-.500 season and he would be gone. Instead, coming off the Super Bowl appearance, Cincinnati just extended his contract through 2026. Now, in three seasons including playoffs, Taylor’s coaching record is 19-33-1, a .368 clip. In fact, only three coaches in the league have a worse winning percentage than Taylor: Matt Rhule of Carolina, Dan Campbell of Detroit and, of course, Robert Saleh of the Jets. Cincy will need to go 16-1 next season for Taylor to get his career mark over .500. Play the under and play the under on Cincinnati sniffing another Super Bowl over the next four years.

The combination of the Rams winning, but not covering the spread, resulted in a lucrative day for Nevada sportsbooks. A record $180 million was wagered on the game with the books winning $15.4m, for a hold of 8.6%. That comes on the heels of a fantastic 2021 if you’re a Nevada casino operator; not so much if you’re a casino customer. Last year state casinos won $13.4 billion. The players’ best odds at winning was at the nickel slot machines with ‘only’ 5.3% of coins dropped into the machine kept by the house. A $5 slot machine resulted in a 5.7% hold by the casino. Quarter slots were held at 8% while the popular penny slots at 9.9% for the bad guys. At the tables, blackjack was a 14% winner for the house and craps 15.4%. Roulette, gaining popularity at a non-rivaled pace, was a 20% win for the casino. And one I don’t believe is the sportsbooks kept ‘only’ 5.5% of the overall money wagered. From personal experience I would have thought it was closer to 90%.

Not sure this is in the Olympic spirit but before the games started most of China’s Olympic men’s hockey team had never been closer to Beijing than their local Chow Mein Express. Seventeen of the 25-man Chinese roster were either born or spent their childhoods in North America, along with one Russian. The most prominent of the Chinese squad was Jake Chelios, the 28-year-old son of National Hockey League legend Chris Chelios. According to the Wall Street Journal, when asked whether he naturalized as a Chinese citizen, per Olympic regs, Chelios replied, “I don’t think we are supposed to comment on that.” Team China’s goalie, Jeremy Smith, is no doubt from that long line of Cantonese Smiths. And to make sure the cover-up looked kosher, Chelios played under the name Jieke Kailaosi while Smith went by Shimisi Jieruimi. Mercifully, it’s over now. The ruse failed. In China’s three qualifying round games against the U.S., Canada and Germany, they were only outscored 16-2. Hold the MSG, please.

And congrats to Finland who late Saturday night beat Russia 2-1 to win the men’s hockey Olympic gold for the first time ever.  The Fins finished 6-0 and didn’t even get to play China.

This was supposed to be the first weekend of spring training, a holy time for most baseball purists. Instead, minor leaguers are putting the Neatsfoot oil on their gloves, with the sweet, distinctive odor that all us kids remember. Come on baseball, it’s time. We know there will be a season played this year so cut through the nonsense. How about each side give a little of the excessive riches back to the other, and let’s get to Florida and Arizona for spring training and a timely start to the season. This year the designated hitter will become universal in both leagues and the runner-on-second-base to start extra innings gone. Spring won’t be spring without you.

If you think accidents or injuries are something to worry about only when you are traveling overseas, take a lesson from the National Football League. The NFL enrolled all their traveling staff in Sunday Morning Coffee’s sponsor, Medjet, for the Super Bowl in LA and the Pro Bowl and upcoming NFL Draft in Vegas. They want their employees to have a sense of comfort that if the unthinkable happens they have a medical way to get back home to their family and physician circle for continued care. Accidents and illness doesn’t only happen internationally. Over half of the annual Medjet medical transports launch domestically. It’s a membership that comes in very handy when you least expect it. Protect yourself. Probably Joe Burrow was thinking Medjet every time he stepped back into the pocket and saw Aaron Donald or Von Miller charging. Take a look at medjet.com for more details.

All our life we have been schooled that once you drive a new car off the lot, depreciation starts. Not so much anymore in this Covid marketplace. A shortage of new car manufacturing has put resale value on used or pre-owned vehicles at an all-time high. The average price paid for a new 2021 model-year vehicle last April was $38,585. Last month that same vehicle, slightly used, was carrying a $48,765 price tag. 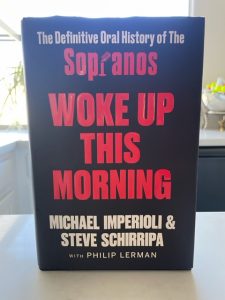 A great read for any Sopranos fan.

Ironic was the Chevy commercial during the Super Bowl that featured Jamie-Lynn Sigler and Robert Iler of the Sopranos. Over the past month, I’ve been in the midst of a Sopranos renaissance. To me, the show is more enjoyable now than it was in the early 2000s. In tandem with my mini-binge, I just finished a great new Soprano’s book, Woke Up This Morning, by Michael Imperioli and Steve Schirripa aka Christopher and Bobby Bacala. It’s 484 pages of outstanding behind the scenes stories, back-stories and humor. Most of the key cast are featured in the interview style format. Everyone’s reverence for series creator David Chase, the late James Gandolfini and Dominic Chianese, Uncle Junior, who will be 91 on Thursday, is off the charts. It’s all high road fun reading. If you were a Sopranos fan, you’ll love it.

Back on July 25, 2021, we mentioned in SMC the Oakland A’s were flirting with Las Vegas as a potential home should their negotiations with Oakland for a new stadium fail. A’s brass made multiple trips here, teased us with all sorts of potential building sites, were offered free land by one developer, and then reported they were in negotiations with the Tropicana Hotel on the Strip to buy it and build a stadium. All along SMC said it will never happen; the A’s were only using Vegas as a ploy to get Oakland’s attention and funding to build a new stadium. We are not right very often but look for an announcement over the next couple of weeks that the ball club and the city of Oakland have reached an agreement to stay put in the Bay with a brand new stadium complex. Vegas is none the worse if the A’s don’t move here.

Term limits, what term limits? Queen Elizabeth II assumed the throne on February 6, 1952, three months to the day before I was born. She’s 95, will be 96 in April and going strong, save for recently cutting back on her afternoon martinis. A remarkable woman.

A new survey says San Antonio, Texas, is the number one city in the country for courteous Uber/Lyft riders. I’ve never been to San Antonio. You think it’s any coincidence?

Sorry to hear about the loss of Howard Hesseman on January 29 at the age of 81. Everyone loved WKRP’s Dr. Johnny Fever. Hesseman played that role as well as any on television during the sitcom boom years of the late 70s and early 80s.

Finally, we hear rumblings that the NFL is not too happy with the last two Super Bowls being played in the home stadium of Super Bowl participants. The two hosts—Tampa Bay and Los Angeles—also won the trophy. To guarantee that won’t happen again the league is considering moving the game to a permanent site — Dallas.