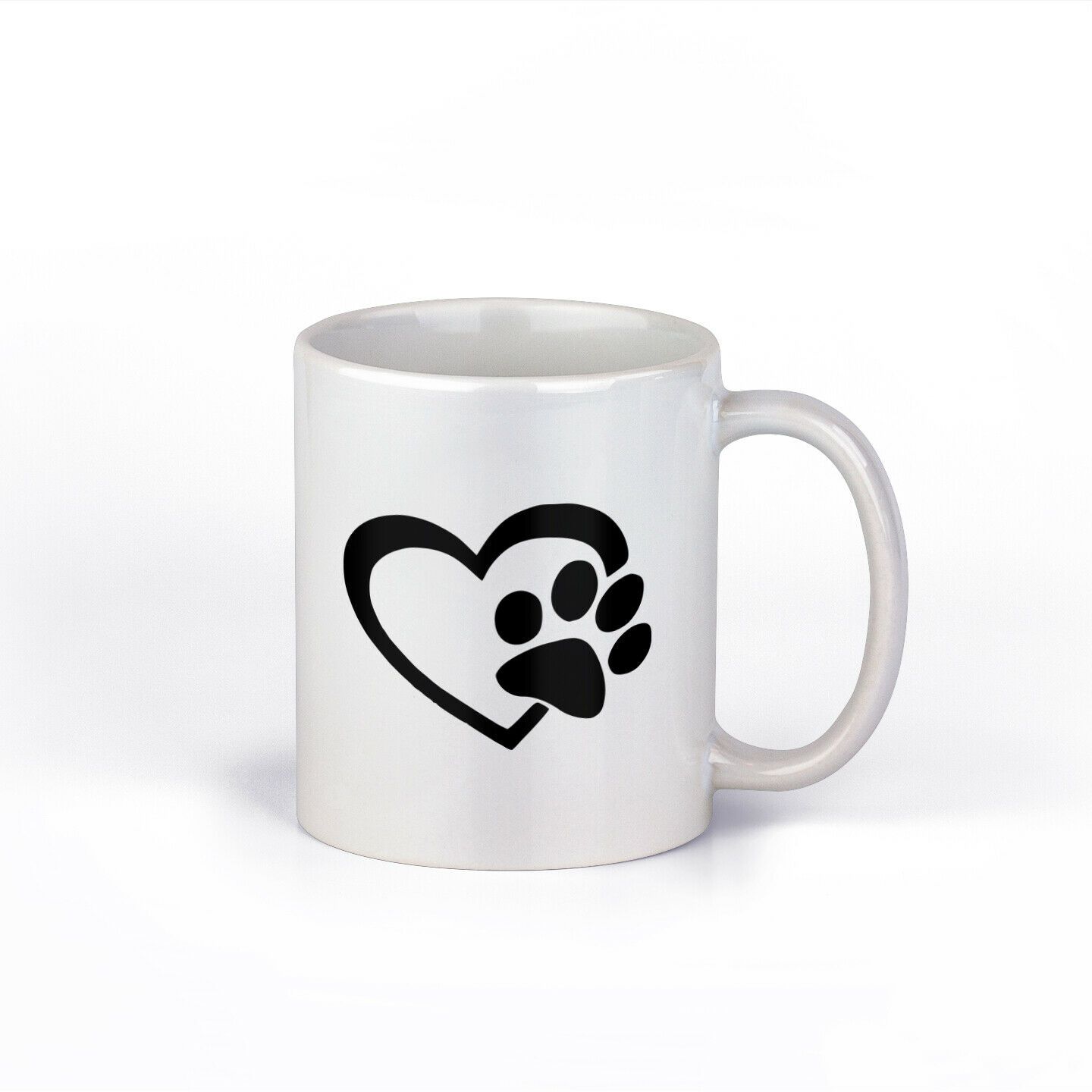 Tell me about it, Joe. I feel your pain. Not really just your pain, but my own, too. When did playing with our dogs become so treacherous? Man’s best friend, eh? Major and Deuce. Major, your German Shepard, was frisky and next thing you know there’s a hairline fracture in your foot and you’re walking in a boot. Heck, not even that pit bull named Donald you warded off for six months, did that to you. As for me, I should have known better. Mine was pure stupidity. 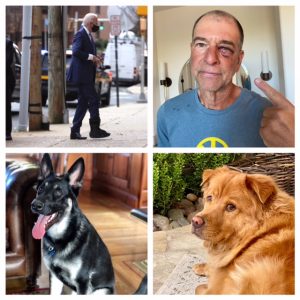 A fractured foot in a walking boot and a messed-up eye courtesy of our pals Major and Deuce.

Deuce, our four-year old Chow-mix, is very skittish. Early one morning about three weeks ago, I snuck up behind him and wanted to rub his tummy. No dice. His immediate reaction was to throw his head at me, teeth first. He got me just below the eye; lacerated my lower eye lid; had to have it surgically reattached. I’m lucky because I was told there is no damage to the eye itself, but my vision is still very compromised. Second round of corrective surgery forthcoming.  Funny how  different dogs behave. Ibis, our older Chow-mix who’s 12, is so opposite; you could sneak up behind him, hit him upside the head with a rubber mallet and he would turn around, give you a smile and then lick your face. Deuce, a fretter, wants part of your face when surprised. Lesson learned by me. And at 78, Mr. President-elect, you should now know better, too.

Major and Deuce also share something else in common. Both are rescues: Major from the Delaware Humane Society and Deuce from the Greater Birmingham Humane Society. Both pets were fostered by our respective families and then adopted by us. Major will become the first rescue dog to ever make the White House home. That is wonderful stuff.

After our sports-on-television starvation diet from mid-March until late June, when the only thing a junkie could feast on was Korean baseball, we quickly overdosed when our games once again began. Television ratings show there was only so much we could consume at one time. Events were played in different time windows from what is traditional for the respective sport. Comparing viewership for 2020 to the same event back in the innocent, happy and fat days of 2019 show: the NBA finals were off 51%; Indy 500 -31.5%; Stanley Cup Finals iced at 61.9%; Kentucky Derby viewership down 50%; US Open Men’s and Women’s tennis down 46%; the World Series trailed by 30% and the final round of the golfing US Open down 56%. Only one sport showed an increase: the WNBA Finals which were up 15%. Okay, without Googling, tell me who played for the WNBA championship.

In the quickest off-season turnaround in sports history, the NBA opens training camps full tilt on Tuesday, less than sixty days after the Lakers beat the Heat on October 11. Somebody want to nudge the NHL and see if they have a plan?

The NBA announced Friday they will suspend random marijuana testing for the 2020-21 season. That gives a whole new meaning to playing the high post.

The Seattle Storm swept the Las Vegas Aces to win the WNBA.

Thanksgiving weekend, no matter how COVID compromised it might have been this year, is a weekend for shopping. But paying $49.99 for the pay-per-view of the Mike Tyson-Roy Jones Jr. ‘fight’ is a bit on the we-have-nothing-better-to-do-with-our-money side of things. Reportedly, there were 1.2 million PPV buys. Incredible, especially when compared to the Fury-Wilder heavyweight championship rematch in February which ‘only’ did 800,000 buys. And that was a ‘real’ fight. Tyson, 54 and Jones Jr. 51, scrapped for eight forgettable rounds. The state of California sanctioned the scrimmage but without judges. Word is Tyson felt he was sharp enough to consider coming back and fighting again for real. Leon Spinks, where are you?

And throwing more coins into the fountain, here’s a pretty staggering number— since Election Day, as a result of over 400 email and text messages to its database, the Trump campaign has received over $200 million in contributions, mostly from nickel and dime supporters to fight off the bad guys. 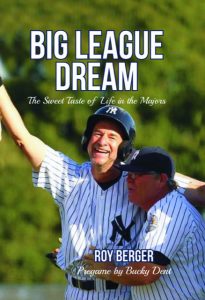 A self-serving promotion for holiday shopping.

If you still have some spare change after bankrolling Tyson and Trump, how about a nothing-better-to-do-with-your-money cheap promotional note? For that old-time baseball fan on your holiday list, there’s still time to order Big League Dream. You can find it on the ‘books’ tab on Amazon or directly at Bigleaguedream.com. It’s received 22 five-star reviews on Amazon, almost all of them legit. Actually, all of them are legit. Honest. But you better hurry, there are only a couple (thousand) copies left.

Recreational golf, which has been on the downslide for years, has benefited from people getting antsy during the pandemic. In September, across the country, rounds played increased by 26% from a year ago. For 2020, projections are for an overall play increase of about 10%.

Just as things appeared to be getting a little better in Vegas and entertainment was on the verge of resuming, Nevada’s governor has brought down the curtain. With COVID cases spiking to uncontrollable levels, Gov. Steve Sisolak has put the state on “pause” for three weeks. Masks are now required inside and outdoors; restaurant capacity reduced to 25% and casino showrooms, which were planning on 250 seats can now offer a max of 50, which financially is a no-go except in the smallest of clubs. A steady influx of weekend visitors is the cause of the rapid rise in cases. The most recent tourism results for October show Las Vegas visitors have declined 49% from the same month a year ago. For 2020, the city is off 54% from 2019. With convention and trade-show business gone, Vegas has turned into a weekend town for young revelers. You can get a room on the Strip for an average of $111 a night, by comparison a few dollars less than what you might find at the Royal Rumble Motor Lodge in Waterloo, Iowa. With no midweek business, Mandalay Bay, Encore and Mirage hotels all close at noon on Monday and don’t open again until noon on Thursday. And December will only get rockier on Las Vegas Blvd. The slowest business month of the year was always propped up by the annual rodeo coming to town. This year with Vegas visitation limits, the wranglers have moved to Arlington, Texas. Expect more pre-Christmas weekday closings at some of the major Strip properties. Sad.

Looking at COVID from a positive lens, worldwide over 34 million people have contracted the illness and recovered. 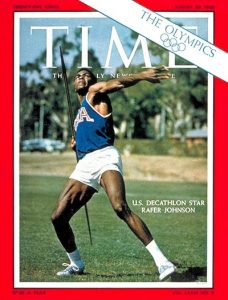 Rafer Johnson died on Wednesday. Johnson, 86, won the decathlon at the 1960 Rome Olympics. Recognized at the time as one of the world’s greatest athletes, he  carried the U.S. flag at those same games that produced light heavyweight boxing champion Cassius Clay. Johnson is also remembered for being with his pal, and 1968 presidential candidate, Robert Kennedy the night RFK was assassinated in the kitchen of the Ambassador Hotel in LA. Johnson was joined by NFL star Rosey Grier and journalist George Plimpton in apprehending Sirhan Sirhan, the gunman.

After watching Detroit and Houston play a week ago Thursday, I’m convinced the only thing the Lions bring to the NFL is an early game on Thanksgiving Day. Otherwise, they are totally irrelevant.

And, speaking of football irrelevancy, please don’t forget my Jets who are now 0-11. Five games to go to clinch the number one draft choice, but pesky Jacksonville at 1-10 refuses to go away. For some unexplainable reason, Jets coach Adam Gase is still hanging around. He gets rewarded after every loss with another game. No Jets fan would be surprised if Jets’ brass isn’t looking at a contract extension for Gase. Today’s game worries me. The Raiders come to town fresh off a 43-6 drubbing in Atlanta. Over the last couple of weeks, the Raiders seemed to have lost their way and could be live chum. The Raiders are the only team this season to beat the Chiefs. By the time today is over will they be the only side to also lose to the Jets? 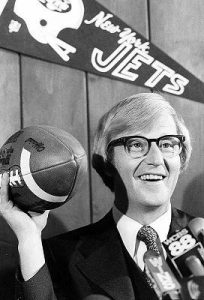 1976 was a forgettable year on Holtz’s resume.

Was flipping through channels on Thursday morning and on FOX retired football coach Lou Holtz, 83, was receiving the Presidential Medal of Freedom. Holtz had an incredible level of success in college football at NC State, Minnesota, Arkansas, South Carolina and of course, Notre Dame. As good as he was on game day, Holtz was even better as a motivator and mentor to young people preparing them for life after football. It probably didn’t hurt his Medal of Freedom chances when he called President Trump “the greatest president in my lifetime.”  Trump, reading Holtz’s accomplishments, somehow left out Holtz’s only NFL job — head coach of the Jets in 1976. Lou never finished the season, bailing with one game to go and a woeful record of 3-10, which by today’s Jets’ standards is perhaps Hall of Fame worthy. As a Holtz aside, the first University of Miami game I ever attended, as a freshman at the U in 1970, was against William and Mary and its second-year head coach Lou Holtz.

The Steelers are unbeaten but BetMGM sportsbook favors the defending champion Chiefs to repeat as Super Bowl winners. Kansas City is the 3-1 favorite. Pittsburgh is second choice at 5-1 followed by New Orleans at 6-1 then Seattle at 9-1 and Green Bay at 10-1. The AFC is a 2-1 favorite to win the game.

You’ll probably never see this number again. The past two weekends against their biggest rivals, Auburn and LSU, Alabama was favored by a combined 54 points. Bama crushed Auburn 42-13 and then manhandled LSU on Saturday night 55-17.  That’s 97-30, an easy 67- point cover.  Roll Tide.

Nice note from Las Vegan SMC reader Nancy Shinder, who found out in Sunday Morning Coffee a few weeks ago, that the Maui Invitational was moved to Asheville, NC. Nancy is by no means a basketball fan but her daughter, Dannah, who lives in LA, was supposed to go to Asheville for Thanksgiving to be with friends. Both agreed that with the basketball tournament in town she would be COVID safer staying away. So Dannah changed plans and came over to Vegas to spend the holiday with her family. Thanks for sharing, Nancy.

Hanukkah begins on Thursday night.  Roll my eight gifts into one. All I want is to get through this virus mess we’re in quickly and safely.  Let’s be smart, put this into the rear view mirror by spring and start living life again.

And finally, ever since Deuce’s accident with me or mine with him, he knows he did something to hurt me. He has been incredibly attentive and affectionate. He will sidle up next to me and give me a bump so I know he’s there and I can rub his head. It’s gotten to the point where I’m kinda hoping Andi also bites me.