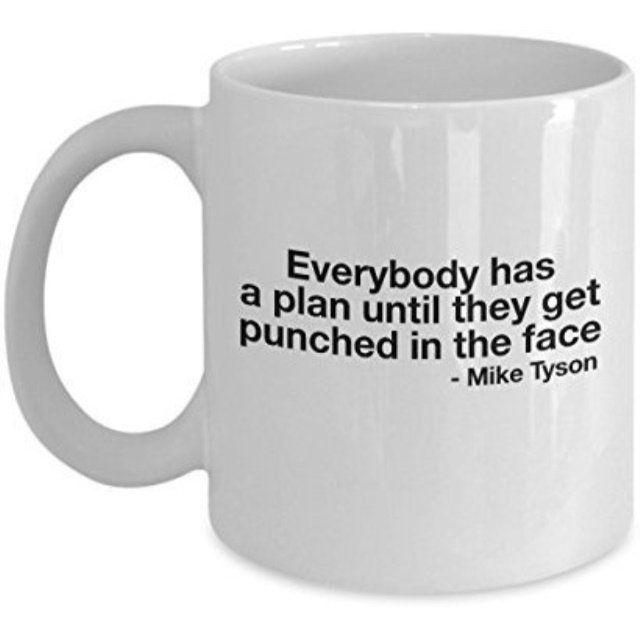 Mike Tyson scraps eight meaningless rounds in a made-for-TV event against Roy Jones Jr. a couple of weeks ago and proclaims himself ready for a return to the ring.

I celebrate the 50th anniversary of my boxing debut and ask if Tyson can do it, why can’t I be like Mike?

I know what you’re thinking; it doesn’t look like Mike Tyson and I have much in common. Right?

He’s got a tattoo on his face; all I’ve got is a beat-up eye from a piercing canine. Tonight, I’m celebrating the fourth night of Hanukkah; he’s not. And most importantly, he’s a righty and can punish you with a hook that would penetrate a commercial freezer door; I’m a southpaw, whose tap barely rattles confetti.

However, what we do have in common is undeniable. We both fought for a heavyweight championship and now both of us are retired from our pugilistic prime. One career was memorable; the other, not so much. And these days we both get our mail delivered to zip codes in Las Vegas, Nevada.

Tyson had 56 fights, winning 50. He was the World Boxing Association, World Boxing Council and International Boxing Federation heavyweight champion. I fought, use that term lightly please, for the University of Miami Men’s Residence Hall Association (MRHA) heavyweight crown. Tyson’s career in the ring went for 215 rounds, about 600 total minutes. Mine, just a little bit less.

It’s been half a century since I stepped into the squared circle. As a matter of fact, it was December 8, 1970. Tyson was a four-year-old toddler. For me, the good news is over the last 50 years I haven’t lost any speed, strength or agility from my ring debut. You can’t lose something you never had.

Tyson’s handlers are encouraging him to give it another go at age 54. That’s where we drift apart. Even though I’m only 14 years older, my peeps don’t think it’s a good idea.

“Listen, I don’t know if you are serious or not,” Tony Musto said when I told him what I was thinking, “but from what I remember, I’d advise you to make sure you have your estate documents in order.”

Musto didn’t tell me what I wanted to hear. Despite having a ringside view, he wasn’t much help back in 1970 either.

Nineteen guys from our dormitory floor at Jackson House signed up for the Miami intramural boxing competition in the fall of ‘70. To qualify for the bell, each boxer required completion of ten supervised training sessions and parental consent. One by one, 18 of the 19 signees bit the dust. On fight night, only one was left standing. A proud but not necessarily smart individual.

Who knows why? Who knows what I possibly could have been thinking? Jews don’t fight; we are boxing promoters. Most incredibly, what could have made my parents sign the consent form? Maybe tuition was more of a hardship on them than I’d realized and this could be their way out. May Mom and Dad rest in peace, but now I’m certain this entire debacle was their fault. They could have short-circuited it like the other 18 sets of parents. 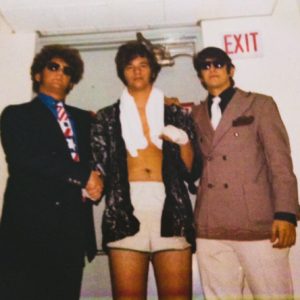 On fight night, nervous didn’t come close to what I was feeling. Sick is probably more apt. A new definition of nauseous. Musto, a junior, and Jeff Bomser, a fellow freshman, were my ‘seconds’. They dressed the part. Looking like a couple of gangsters, puffing on stale cigars that were gagging them, they escorted me on the long walk from our dorm to the outdoor campus boxing arena, maybe a quarter mile away, right next to the ROTC building where the real fighters hung out. For some unexplainable reason, I wore a Japanese smoking jacket. I have no idea why or where it came from. I looked more like a guy ready to puff on a pipe than pop someone in the kisser.

The bleachers were packed. Not an empty seat. I’m not sure if there were a hundred blood thirsty students or a thousand, probably somewhere in the middle. Missing was Beth Aransky, the pretty coed I was courting. She told me beforehand she wouldn’t be there because “I don’t want to see you get beat-up.” Made me overflow with confidence.

We made our entrance into the arena with Bomser and Musto blowing whistles and creating havoc, precursor WWE fashion. “We just wanted to call attention to our boy,” Musto remembered. They tabbed themselves ‘Beautiful Bomser’ and ‘Magnificent Musto.’ They touted me as ‘Ramblin’ Roy Berger, the Jackson (House) Jolter.’ They relished the attention. I didn’t. Embarrassment soon turned into humiliation.

The first time I saw my opponent, Bob Vinson, I just about keeled over. We were in the heavyweight division, so determined by any weight over 175 pounds. I tipped at about 180. Vinson, a walk-on scout team linebacker for the football Canes, was 210. I seriously contemplated running away, but my feet wouldn’t move. 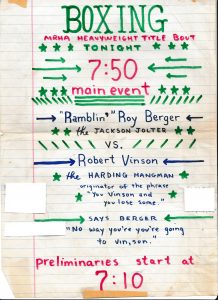 Pre-fight propaganda I couldn’t live up to.

When our bout was called into the ring, ‘Beautiful’ and ‘Magnificent’ worked the crowd into a frenzy which included about 50 guys from our dorm, most of whom just had an intimate encounter with cheap Busch beer. I wish I’d joined them.

Referee William “Bunny” Lovett, a celebrated Miami boxing official, signaled us to the center of the ring. Lovett was big time. He was a judge for the first Cassius Clay-Sonny Liston fight six years earlier on Miami Beach. Granted Clay-Liston wasn’t as high profile as Vinson-Berger, but nonetheless Lovett seemed qualified. In the ring, Vinson was shirtless and chiseled. I was a bag of bones. I wore a white t-shirt hoping it might absorb some of the blows. 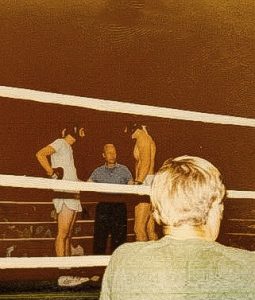 We stood and stared at each other like the boxing manual instructs you to do. Lovett recited the rules that I never heard. I was too nervous. Instead, I kept muttering under my breath “Please don’t hurt me. Please don’t hurt me.” I hoped Vinson heard me. There was no betting on the fight because nobody would take me.

“I got to be honest with you,” Musto admitted all these years later. “Before the fight I thought maybe you had a chance. Once I saw Vinson, I knew there was none.”

Three one-minute rounds were the rule. Once the bell rang all the training was for naught. Every bout turned into one of those rock-em, sock-em robot slugfests. Ours was no exception.

Standard professional boxing gloves, like Clay, Liston and Tyson used, weigh ten ounces each. We used 16-ounce gloves which is like fighting with a pillow on each hand.

I caught Vinson with a good shot early on. A hook square on the shoulder. That may not be the ideal place to do damage but I was thrilled I hit him anywhere. And it hurt. Not him, but my left hand felt like I hit a bag of sand. I thought I broke it. I have no recall about the rest of the round until he knocked the wind out of me with a right to the solar plexus. Laymen might call it a shot to the gut. Call it what you want, but either way the result was the same: I crumbled to the mat with ten seconds left in the round. Towels were tossed into the ring from every direction. It looked like a laundromat. Referee Lovett asked me a question. I answered “Yes.” He waved his hands over his head and yelled, “That’s it, it’s over.” I thought he asked me if I was okay. I answered “Yes.” When I crawled back onto my feet and regained my senses he told me what he really asked was “Did you have enough?” Either way my answer was going to be the same. 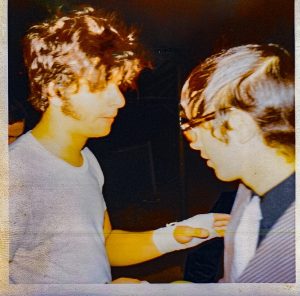 Vinson wins on a TKO at :57 seconds. He was the second happiest guy in the ring. I was ecstatic to be able to walk out, mostly unaided.

Musto, whose boxing managerial hopes ended that night, was disappointed. “I had my between rounds speech ready,” he remembered, “I was going to tell you to try and hit him more and have him hit you less, but you never gave me the chance.”

A lot of time has passed since that 1970 evening. Tony went on to a distinguished career in law as an attorney and law school professor in South Florida where I tracked him down all these years later. He also gave his time generously to municipal government and civic leadership. He seems to do everything well except manage boxers. 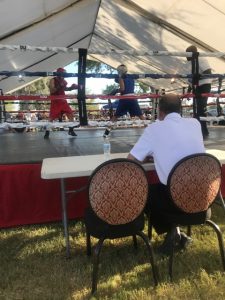 I’m a much better judge than a fighter.

Mercifully I left the fight game behind before reengaging as a licensed Boxing USA official in Nevada two years ago. I judged about 35-40 amateur bouts before COVID knocked us all out. Sitting on the ring apron with a scorecard is a much safer place for me than inside the ropes.

So Magnificent Musto, a half century later, what’s your memory of December 8, 1970?

“That’s easy,” he laughed. “It was the most one-sided bombardment in early December since Pearl Harbor.”

Mr. Tyson, the comeback ring is all yours.