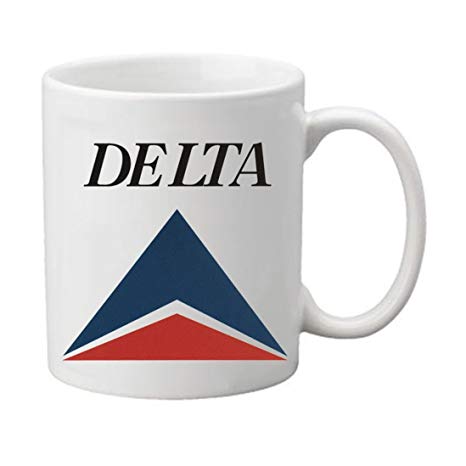 I admit I still have a lot to learn about a lot of things with not much time left on the game clock. Airline travel isn’t one of them. With over thirty career years on the road, with more time in the air than the Flying Wallendas, I’ve earned my travel doctorate. Or so I thought. Delta had other ideas. This week they made me feel like an incoming freshman.

Back in the day, my day, I had more airline, hotel and rental car medallions than Mark Spitz had gold. I was on the road for at least a part of three weeks every month. Andi wanted to know what I could do to make it four. I’ve eaten three meals in the three different cities on the same day multiple times. I was on a first name basis with airline counter personnel, premium lounge folks, hotel desk clerks, bellman and bartenders. Part of it made you feel really special; the other was depressing, being away from home so much. Service people said when they meet me I’m hard to forget. I don’t think that’s meant as a compliment.

I’ve seen it all with the airlines. Delays, cancellations, situations that could have been avoided and stupidity. You name it, I’ve seen it. I’ve opened overhead compartments and had flight attendants jump out; I’ve had to tell gate personnel who were having a good time socializing that it was time to board; I’ve sprinted through airports, mainly O’Hare and Atlanta, trying to make a connection that was tighter than a bedsheet around an Epstein’s neck. Okay, that one was bad. I’ve seen jetway doors close with panicked connecting passengers maybe thirty seconds from the gate; I’ve sat on runways for what seemed like forever because our gate was occupied, despite a dozen empty ones on the same concourse; I’ve even kept my eyes open and feigned interest on the safety demonstration once or twice. Travel enough and you quickly learn that whenever the captain starts any announcement with “Well folks” the news that follows isn’t good. Fortunately, I’ve never made an emergency landing or had the air masks drop down but I do know that I’m supposed to put mine on before helping the kids and those that need assistance. Or is the other way?

I learned a valuable lesson in travel on September 11, 2001. Stuck in DC with seemingly no way to get back home to Birmingham, I talked my way onto an Amtrak, which inexplicably was still operating, for the most enjoyable fourteen hours someone could spend in motion. What 9/11 taught me was when traveling, always be prepared and always have an alternative plan to get where you need to be. I never leave home without it.

But after all these years of traveling and seeing more stupidity and incompetence than can possibly be described, I am by no means an airline basher. They make it too easy. Actually, I’m amazed the travel industry does what they do as safely as they do. We tend to get caught up in the small stuff and not marvel that statistically any form of transportation is riskier than being on an airliner.

What I wasn’t prepared for however is what happened to me last Monday when I attempted to leave Las Vegas. Four times a year I’m headed back to Birmingham, Alabama for a quarterly Medjet board meeting. Southwest usually flies the route non-stop, making it very easy, but the grounding of the Max jets scrapped the haul. So now you can fly Southwest with a day and a half layover in Houston or take Delta via Atlanta, flying over BHM and then back, on one of the almost hourly connections.

Delta sends me a notice on Sunday morning, twenty-four hours before my 9 am Monday flight, that the window is now open for check-in. I’m a good boy and do as I’m told. I’m a Delta million-miler flyer — hold the applause — and thus have medallion status for life. All that really means is I can pick-off the premium seats in stowage class before the rank and file. So when I booked the trip ninety days ago I was able to grab an exit row aisle – 27D, my go-to seat if you’re scoring at home.

Two hours later I got another email from my friends at Delta letting me know I was upgraded. No, not to the front of the boat but to something they call “economy comfort” which is like riding shotgun on a Greyhound. I never asked to be upgraded but Delta was real proud of themselves that they did it for me. Making it worse, they put me in a middle seat – 12E. I am not riding four hours in a middle seat especially when I had the best seat in the entire coach cabin. It’s like going from a petite suite at a Red Roof Inn to a studio at Motel6. I don’t care whether you are going to leave the light on for me or not, I want to stay right where I am in the lap of pedestrian class luxury.

So I called Delta to downgrade. Not many passengers do that, but I’m me. After an hour on hold, I spoke with a reservation agent who said my original 27D was still open, would I like it back? Yes, of course I would. I literally watched my boarding pass change from 12E back to 27D. She also sent me an email confirmation of the seat change.

After a quick Monday morning workout, I was off to McCarron to find the all-important great parking space. I’ll pass open ones and drive circles for thirty minutes waiting for that perfect spot. Parking is important to me. Anywhere. A bad spot makes for a shitty day. Finally snatched one on level four. I felt good.

I know how to board an airplane, or at least I thought I did. Being so damn tech savvy, I loaded the boarding pass on my iPhone. My group is called so I put the phone on the glass reader display only to be greeted with the message, “Boarding denied. See agent at counter.” Knowing it was a mistake I did it a second time. Same result. And then a third.

They only thing I could think of was I had been profiled. I looked suspect. I had a large Band-Aid from eyebrow to eyebrow and a red, puffy eye as only an hour or so earlier Deuce tried to give me a peck good-bye with his front teeth. It was probably serious enough to call in the ringside physician for a look, but I was going on this trip no matter how much blood was still dripping. If I looked the part of an unsavory character, at least I wanted the chance to explain.

That wasn’t it. Caryn, the counter agent, asked me if I had a seat change. I said yes, a couple in fact. You guys moved me out of where I wanted to be and then I moved back again. She said I had to recheck-in and I should have been told that by the rep that made the seat change. Nope, didn’t happen. I did however get a confirmation of the seat change and literally saw the seat assignment change back again on my phone. I rhetorically asked Caryn “what is the only way to get a boarding pass” and answered my own question — “by checking-in.” I had a boarding pass. I had to be checked-in. Right?

All that was for naught as they had already given my seat away. The flight was oversold and they were asking for ticketed passengers to give up their seat for a $1,200 travel voucher. You gave up my seat for me. Where’s my voucher?

I didn’t go to Birmingham. I spent ninety minutes at the airport and despite a great parking spot went back home, but not before I debated calling an Uber to keep the spot. Not so long ago stuff like that would make me flip my lid and start tossing things like airport computers. I was calm. I was cool. I am getting old. There is nothing you can do about stupidly other than shake your head and grin. I am a good head shaker. Not so much a good grinner. At least not on Monday morning. This matter between Delta and me isn’t finished. Not by a long shot. I want a full refund and a $1,200 travel voucher because they just took my seat and gave it to someone else. While I’m at it I am going to ask for $8.97 for the Jamba Juice PB Chocolate Love shake I had at the airport but really didn’t want. Kick in the four bucks for parking, too. I phoned Delta as soon as I got home as Caryn told me to. Got a borderline incompetent in the call center. He told me my fare was non-refundable, non-cancellable. I laughed. I asked him if it was non-cancellable, why did you cancel me? He gave it his best Ralph Kramden ‘humada humada.’ I reverted to a former self. I got irritated. I told him we were both wasting our time, get me to a supervisor. He said no one was available but one would call me back within an hour. Did you get a call from Delta instead of me? I didn’t. I haven’t had a good scrap since I retired. I’m getting restless. I’m ready.

Other than the Birmingham board meeting, I also had plans during my brief stay to say goodbye to a former business colleague and now friend, Phillip White, who was moving to Utah three days later.

The next morning, just to rub a little salt to the wound on my forehead, Phillip sent me a story by Jason Aten of Inc. that the airlines had just announced their IDB, or involuntary denied boarding, results from the first quarter. As Mr. Aten aptly described “if you’re on the receiving end, it usually feels more like a swift kick in the rear, as the door closes at the gate with you still standing in the terminal while your flight leaves without you.” Yeah, tell me about it. 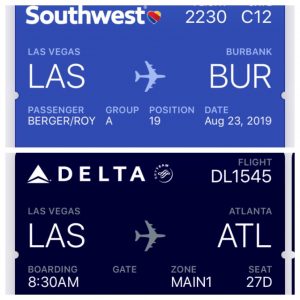 One is a real boarding pass. The other, I found out the hard way, only pretend.

The second quarter IDB results showed American Airlines bumping 5,227 passengers and Southwest 2,500. Delta reported zero. None. Zilch. Nada. Everyone that was supposed to be onboard for every flight, according to Delta, was. I have become a statistic. Clearly every Delta flyer knew that recheck-in rule but one.

Aten’s story goes on to say that to date, Delta reported no IDB’s for July or August and only three for the entirety of 2019. Looks like I am now the Delta 2019 IDB clean-up hitter.

Alas, I’ve been redeemed. I flew to LA this weekend, boarding pass on my phone. Southwest let me on the plane, both ways in fact. I was giddy walking down that jetway. I clicked my heels. I was redeemed. Clearly I still got it. Southwest needs to change their tagline from “Bags Fly Free” to “Unlike The Other Guys, Our Boarding Pass Means Business!”

I’m not sure if the ‘D’ in Delta stands for Denied, Deceitful, or just Dumb. Either way, from now on, color me Delta Dubious.