A whole bunch of things we are thinking about with our Sunday morning coffee today not the least of which is wishing everyone who celebrates a very happy Easter. And if you’re anxiously awaiting the end of Passover, enjoy your everything bagel smeared with cream cheese.

Step aside Major League Baseball, this is Masters week. In Georgia. No outside pressure will ever change that.

I like the guy. I really do. But this week’s news that the details and the cause of his car accident will remain sealed for HIPAA privacy, and the speculation that it conjures, how much longer will our adoration of Tiger Woods continue?

The last time college basketball saw perfection was in 1976 when Indiana went 32-0.  Gonzaga, with a win Monday night, can equal that mark.  The Zags opened as a five point favorite over Baylor.  I hope they get it done.

Who’s old enough to remember when the two Final Four losers played a consolation game for third place right before the championship game?

No matter who wins the tournament, Gonzaga or Baylor, it will be the first NCAA basketball championship for the winner. When Virginia won in 2019, the last tournament played, it was also their first. On the other hand, if you don’t think college football championships lately are the same-old, same-old, consider it’s been 21 years since a school won its first ever title. That was Florida in 1996.

I love this one. Not that the U.S. Postal Service isn’t maligned enough, but now they bring it upon themselves. Just when you thought USPS mail delivery couldn’t get any slower, Postmaster General Louis DeJoy announced two weeks ago oh yes it can. Instead of promising first-class mail delivery would be one to three days, new postal standards say count on it in one to five days. Sure as shootin’ we can expect a rate hike to help slow things down.

I’ve seen all the video of the January 6th Capitol riots that I really care to. What I haven’t seen, which I’d really like to, is film of the intruders who were “hugging and kissing the police and guards” that Mr. Trump recently told us happened.

I thought the WWE was rigged until I watched the Biden press conference.

Here’s a true story: A woman ordered a dozen COVID masks online, but the company only sent her 12. She called and complained. She said it was totally “unacceptable.” To make good they sent her 12 more. They should have sent a dozen.

If you’re a golfer come on and admit it. The sense of satisfaction you got when Bryson DeChambeau hit a drive during last month’s Players Tournament that didn’t make it past the ladies’ tees. I sat there and said, “I can do that.” And in fact I have. Often.

All of a sudden I’ve started to get a flurry of junk email in Spanish. At least I think it’s junk. To make it worse, I don’t know if the tab I’m hitting is to unsubscribe or send more.

Sister Jean, the 101-year-old chaplain and off-the-court mascot of the Loyola-Chicago men’s basketball program was born on August 21, 1919, the same day 24-year-old Babe Ruth tripled with two RBI for the Red Sox.

You probably knew this, but I had no idea Ringo Starr’s brother-in-law is Joe Walsh of the Eagles.

If you don’t think time flies, think how often you take the trash bins out to the curb.

All of us UMiami alums were saddened to hear of the passing of football coach Howard Schnellenberger at age 87. In only four years, the gravelly voiced, gruff, pipe smoking offensive genius rescued the Hurricanes from being scheduled as a homecoming opponent on the verge of program extinction to 1983 national champions. Coach made a decision to recruit the state of Florida and he eventually owned it, enticing kids away from Florida and Florida State making The U the place to play. It worked. We need some of that magic back again. 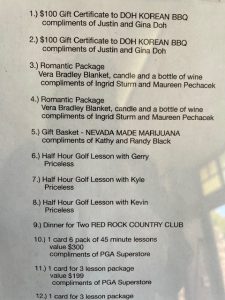 If you don’t think times are a changin’ consider the Las Vegas golf club that offered a gift basket of ‘Nevada Made Marijuana’ as a raffle item in a local tournament last month.

The most traded player in NBA history? That dubious honor belongs to Treva Ariza who, on March 17th, was traded for the 11th time in his 16 seasons in the league. The old record was eight held by Dale Ellis. Ariza, who never should unpack dishes and silverware, has been traded five times since January 2020 alone. What goes around comes around. Ariza, 35, is presently with the Miami Heat, playing in the city where he was born. However, that might have changed by now.

I was never a big Marvelous Marvin Hagler guy but still sad to learn of his passing on March 13th at the rather young age of 66. Back in the 1980s, the middleweight division was maybe the best in the history of boxing: Hagler, Sugar Ray Leonard, Roberto Duran, Tommy Hearns, Vito Antuofermo, Wilford Scypion, Alan Minter, Bobby Czyz. I’m not sure it ever got any better than that.

Remember The National, the daily sports newspaper that debuted in 1990 and died 18 months later? Today’s online version is The Athletic and it’s very good. Packed with information and great writing. Hope it lasts.

Here’s an easy one. What state, by percentage, has the largest senior population of 65 and over? Florida, right? Nope. How about Maine.

I’m not sure why this bothers me, but I don’t know the rules of croquet.

I pondered for a long time what to do with my season-long over/under baseball bet this season before settling on taking Cincinnati under 81.5 wins. Their 2020 ace, Trevor Bauer who won the Cy Young Award last year, is now pitching for the Dodgers. With Milwaukee, St. Louis and the Cubs in the same division I don’t think the Reds will play .500 ball. So far through the first two games of the season Cincy has split, putting them right on the number. 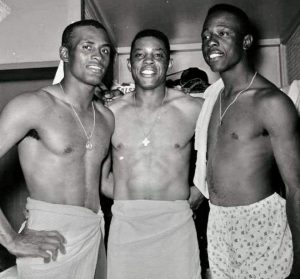 On opening weekend of the baseball season, how terrific is that picture of Roberto Clemente, Willie Mays and Hank Aaron, the three best National League outfielders of the 1960s, in their skivvies? It was taken at either an All-Star game, presumably not in Atlanta, or a slumber party.

We are starting to think about travel again; that’s a very good thing. Time to take trips and not chances with your health and safety. Let a Medjet membership (medjet.com), now with COVID protection in North America and the Caribbean, keep your mind at ease.

Something that’s never been said before: According to Vegas sportbooks the Nets are favored to win the NBA title.

Firefly Lane on Netflix is an acquired taste, but we really liked it.

Becoming a Major League Baseball player is a tough gig. Only 10% of the guys playing in the minor leagues ever make it to The Show.

I’ve been watching hockey for a long, long time. The biggest change in the sport is not the speed or the physicality, though over the years both have progressed dramatically, but the pinpoint passing. What used to be an accident has become an art.

It’s not personal but if I don’t see Dr. Fauci anymore I wouldn’t be upset.

Finally, since we were kids, the one song we heard every week or month of our lives was the Star Spangled Banner. Do me a favor, right now, and sing it. Let me know how far you get.