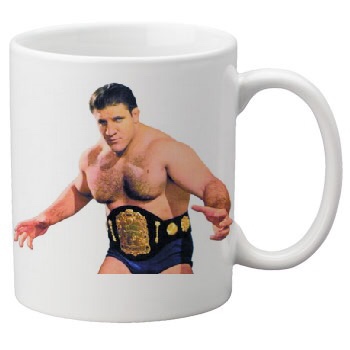 “Bruno Sammartino died today,” I said to Andi over lunch.

She sensed my disappointment. “I don’t know who that is,” she admitted after thinking she should. Andi’s a girl, so she’s excused.

“Bruno Sammartino died today,” I said to Larry Nickles in the office later that day. Larry, north of seventy, responded “I don’t know who that is.” Larry grew up in Mississippi in the 50s and 60s so that gives him a pass on news anywhere outside of Tupelo.

“Bruno Sammartino died today,” I said to Brian Murphy, a financial analyst. “Who’s that?” he asked. Murph, thirty-four, chirped “I have heard of Hulk Hogan.”

“Bruno Sammartino died today,” I said to sales exec Bill Miller, fifty-five, who is old enough to know better. “Not sure who that is.” After explanation, the Texan, unmoved said, “I heard the guy from Night Court died yesterday.”

“Bruno Sammartino died today,” I said to Medjet sales ace Scott Lawson, a couple of years younger than me. I got the confused look. “That one goes right over my head,” he said in shame. Scott, an Air Force brat, was raised in Colorado and Washington during the champ’s reign. That’s almost like growing up in Mississippi.

“Bruno Sammartino died today,” my son Jason told me over the phone on Wednesday morning. It was the first I heard of it. Jason, thirty-seven, for some reason subscribes to the wrestling network. Bright lad.

‘Did you know Bruno Sammartino died today?,’ I immediately text to my younger brother Mike. “Sad,” he wrote back quicker than a three-count.

When I was ten, maybe eleven, the only tougher guys in the world to me, other than Bruno Sammartino, were boxer Sonny Liston and mob boss Carlo Gambino. Cassius Clay took care of Liston; a heart attack, and not the FBI, ultimately felled Gambino. Bruno marched on.

Sammartino was my second sports hero. Bill Mazeroski beat him by a couple of years after walking-off the then-hated Yankees in game seven of the 1960 World Series. Three years later, Bruno beat bad guy ‘Nature Boy’ Buddy Rogers into submission with his trademark backbreaker in only forty-eight seconds at Madison Square Garden to rightfully claim the world championship of professional wresting. Even Rogers’ despicable manager Bobby Davis was powerless to stop this Italian force.

The first time I saw Sammartino I was nine, maybe ten. My maternal grandfather, Poppy Al, would take Mike and me to the Island Garden Arena in West Hempstead, NY, about twenty minutes from our Long Island home. We’d go two, three times a year, always on a Friday night. Sometimes Uncle Jack would join us, too. Poppy Al, a Danish immigrant with a thick accent, would call him ‘Sammartini’. I still hear it vividly. We’d take a Saturday morning drive a couple of weeks in advance of the matches to the box office of the barn-like arena on Hempstead Turnpike, buy our tickets and make sure we got the very first row, next to the ring. It cost $4. If we couldn’t get the first row, I didn’t want to go. Spoiled rotten. 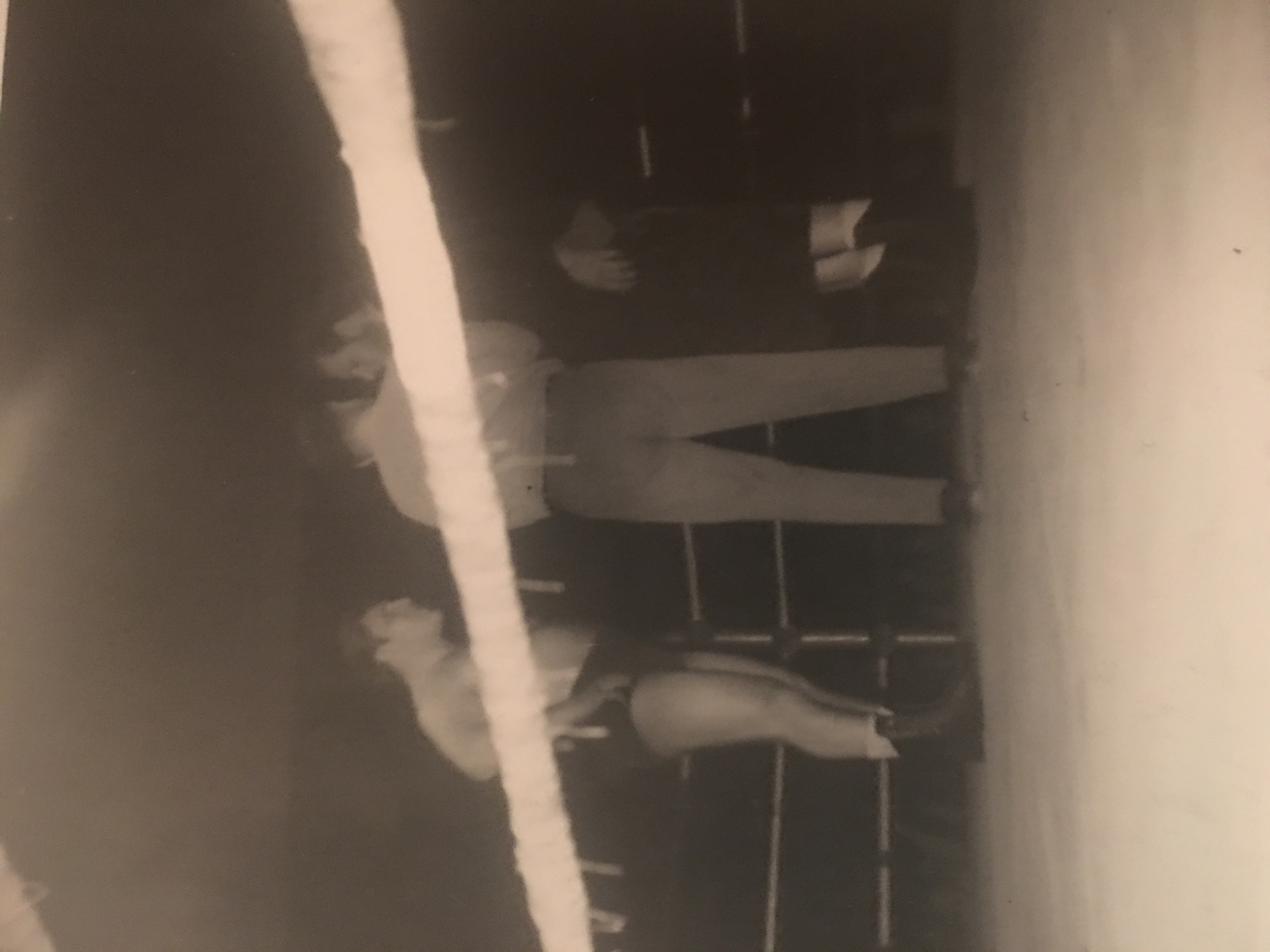 For some reason I saved this picture of Bruno getting ready to square off against Gorilla Monsoon for 54 years My seat was a lot better than my photography.

We got wet from flying spit. I could see not everything was the way it looked on television but it didn’t really matter. I do remember how poor the officiating was. We were as close to the action as the April ‘64 picture of Sammartino and Gorilla Monsoon that I took with my Kodak Hawkeye Flashfun camera looks. It had the rotating cube on top that got four pictures to a cube. I didn’t realize it then, but I was channeling my inner Bruce Bennett and David Pokress, two contemporaries that went on to award winning photography careers. I didn’t.

Sammartino taught me an early lesson in produce and vegetables. His ears were mangled from years of headlocks, body slams and noogies. I learned they were called ‘cauliflower’ ears. Because of that, I’ve never touched the stuff. Thank you, Bruno.

I embraced him. Little did I know then that despite being introduced from Abruzzi, Italy he was actually born in 1935 in the kingdom of Pizzaoferato, Italy which no American ring announcer could pronounce. Abruzzi flowed better and sounded tougher. But the Sammartino family actually moved to Pittsburgh when Bruno was fourteen. Italian tough guys come from the Bronx, or Chicago, or Abruzzi but not Pittsburgh. Polish heroes, like Mazeroski, come from Pittsburgh.

In 1949, when the Sammartino family arrived in the States for pierogis, Bruno weighed 80 pounds. Ten years later, after intense training, he bench pressed 565 pounds and just missed a spot on the 1960 US Olympic team. The Steelers offered him a tryout which he declined to become a ‘wrassler.

Pittsburgh remained home for Bruno for the next sixty-seven years until his passing. “He always made Pittsburgh home and became a fabric of our community,” Joe Billetdeaux, a front office exec for the Pirates remembered. “He loved our city.”

He was inked to a contract with the World Wide Wrestling Federation by promoter Vincent J. McMahon Sr. in 1959. Nepotism didn’t skip a generation in wrestling promotion; McMahon, and his soon to be legendary son, were cut from the same piece of turnbuckle. Sammartino made his debut in Pittsburgh in late ‘59, but he wasn’t in the ring for long. The 5’10”, 265 pound bowling ball of muscle pinned Dmitri Grabowski in nineteen seconds. Hours later, Grabowski was seen hawking pierogies on Forbes Avenue.

It was shortly after Maz put the game winner over Yogi’s head in October, 1960 that I started watching McMahon’s live Wednesday night shows on New York’s Channel 5 from Sunnyside Gardens in Queens. You couldn’t help but love Bruno, who did everything right and fought off all evil. 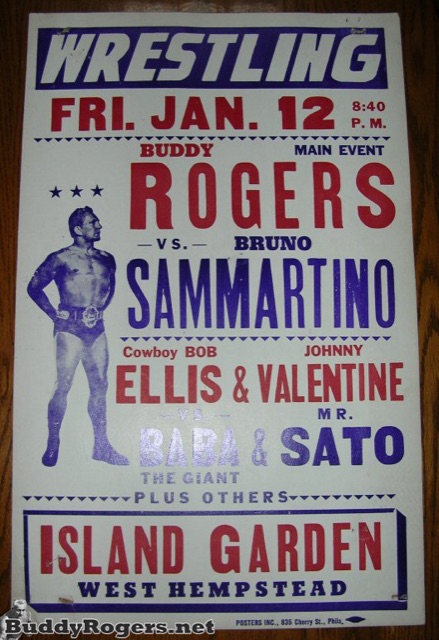 I remember the wrestlers but not the odd 8:40 pm start time. Who can stay up that late anymore?

He won the WWWF crown in May, 1963 in less than fifty seconds at Madison Square Garden by putting Rogers in the backbreaker. There was joy in Mudville after all. In that era there were ‘world champions’ in every geographic area, if not every state. But in the northeast we knew we had the real deal.

He sold out Madison Square Garden as a headliner a record 187 times. Billy Joel, who grew up nearby and probably also saw Bruno as a kid when he wasn’t hanging with Brenda and Eddie on the village green, is next with a paltry 50 straight Garden full houses. I was a part of three or four of Bruno’s MSG crowds back in the day. He was the top performer ever, in the world’s most famous arena, making it even more incredible that my wife and Mssrs. Nickles, Murphy, Miller and Lawson said “Who?”

In 1985, Peter Gene Hernandez was born. Not in Pittsburgh but Honolulu. When Peter was two, his dad who adored the champ, nicknamed him “Bruno”. Peter grew up to be Bruno Mars.

A couple of Bruno’s: the namesake and the original.

Sammartino lost his title in 1971 to Ivan Koloff but won it back three years later for a total run of 12 years as top gun of the squared circle. By then I had moved on from Bruno to Beth and Marcie and Randi, but they didn’t have nearly the moves that Bruno did.

When I heard about Sammartino’s death on Wednesday there was a little piece of my childhood that died, too. If you’re old enough, you know what I mean. The short moment of sadness turned into a smile as I remembered that time in my life and the fun I had spending it with my grandfather and brother.

“Bruno Sammartino died today,” I said to Mike Hallman, two years younger than me, a colleague for the past twenty-eight years and selected as my Medjet successor come July. “I saw that” Mike said without missing a beat.