Incredibly, with as much as Tiger Woods and J.J. Steinhoff have in common, they’ve never played in the same foursome.

Consider. They both attended college on a golf scholarship.  Tiger, highly recruited, decided to go to Stanford in 1995. He stayed two years before quitting school to earn a living. He’s done pretty well.  J.J., not recruited at all, went to the University of Wisconsin-Stout in Menomonie, Wi. on a four year golf scholarship; not for his on-the-course skills, but as a result of being selected ‘Caddy of the Year’ in 1989 by the Kenosha (Wisconsin) Country Club elders.  With that award came a scholarship. He parlayed those honors into a hotel and restaurant management degree. He began his career with a pen in hand, not a wedge.

Today, one is a professional golfer with fifteen major championships on his CV. The other works in the back order department of shipping supply specialist Uline, in Southeastern Wisconsin. He’s been there since 2001, the same year the other won his second Masters.  On a good day, one will break 65; the other, 90. I’ll leave it to you to figure out who’s who. 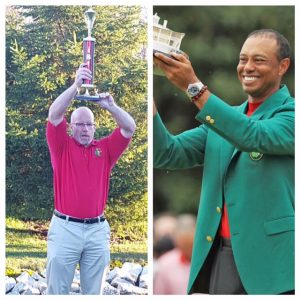 Two golf legends. Two trophies. So much similarity. J.J., red shirt, with his ‘89 Caddy of the Year award. The other guy, red shirt covered by a green jacket with last Sunday’s trophy, not nearly as prestigious.

They each have two kids. Tiger, a daughter and son; J.J., two daughters.  One got married to Valerie about a year before the other had his soon to be ex-wife Elin try to use his head as a driving range.

With incredibly so much between them, the main thing they have in common is a great memory.

Tiger used his to add another green jacket to his Jupiter, Florida wardrobe closet.  J.J. used his to keep me honest.

You know how this memory game goes.  It begins to leave you in your forties; you start to recognize it in your fifties, and by the time you pass sixty it’s in full-fade mode, like Tiger or J.J. shaping a four-iron.

We remember inconsequential things from decades and lifetimes ago, but can’t find a solution for where the car keys might be or what’s that guy’s name that I should know?

Cliche says you can remember that odd night in your teenage years but not what you had for breakfast this morning.  Not me. Being straight up and not braggadocio, I’ve found a solution for remembering breakfast. It’s not a random pill or some secret sauce. I have the same thing every day.  What did I eat this morning?  That’s easy — Greek yogurt with fruit and granola.  Works every time. I will never again say ‘I don’t remember what I had for breakfast this morning.’  Did I take that pill I was supposed take to fifteen minutes ago?  Who can remember?

Then there’s J.J. I met him during my years in the pari-mutuel business when I was operating a racetrack in Kenosha, J.J.’s home town.  Steinhoff remembers too much.  Almost as much as Tiger.

“I remember the first time I ever met you,” the forty-five-year-old former customer of ours, at now closed Dairyland Greyhound Park, told me earlier this week.  “It was at a cigar dinner in the VIP room at the track. You were smoking a cigar and having a great time socializing.”

Here’s where his memory might be failing a bit. It’s probably half true.  I did enjoy a nice cigar back in the day.  Me…socializing?  Well, that’s another story.

It gets worse.  He remembers ‘friending’ me on Facebook in mid-2015, in tandem with a racing event he was preparing to attend. Hell, I don’t remember 2015 or if I’m even on Facebook anymore.

He also reads the all the dribble I write.  “I’ve learned a ton of stuff about life just reading your blogs over the years,” Steinhoff said.  I don’t know whether to hug the guy or feel sorry for him.

So, last Sunday as Tiger was walking up the 18th fairway at Augusta, I got a Facebook notice that I was just mentioned in a post.  I guess that means I’m still on Facebook.

Steinhoff reposted a blog I wrote on June 19, 2015, the Friday of Father’s Day weekend. Tiger had just shot an 80 and 76 at Chambers Bay in Washington and missed the U.S. Open cut. He looked lost. I wrote about a washed-up, thirty-nine-year-old faded legend: “Tiger’s play has become so rank and file it borders on laughable to pathetic…Tiger will never win anything of substance again.”  I had absolutely no recollection of that post until Steinhoff slammed it in my Facebook face with Tiger two strokes away from winning the 2019 Masters.

“I was texting on Saturday night with another guy who knew you and for some reason that column popped into my head,” Steinhoff laughed.  “When it looked like Tiger would win I thought I would have a little fun and send it to you. I had no idea how you would react. I figured maybe you would unfriend me on Facebook!”

“My memory is strange,” he understated.  “There are things stuck in there that don’t belong, but I have a real hard time remembering anything my wife tells me on a daily basis.”  We all feel your pain, J.J.

Memory is exactly what triggered Tiger’s phenomenal Masters story.  At forty-three he doesn’t have the physical strength of the young bucks on Tour. Over the last decade Tiger has had more things physically wrong with him than most guys lying in the morgue this morning. You can get past the domestic issues, the DUI and the pain med addiction but you can’t overcome the physical issues he’s had over the years and play a sport to the level he once did.  But when he got his head straight, things on the scorecard followed. Tiger won not because he is a better golfer than Dustin, Rory, Jason, Jordan or Justin, he won because of his memory; his familiarity of the Augusta National tract over all the years and rounds. He has forgotten more about Augusta than the kid golfers remember. It was what propelled him to perhaps the most unlikely victory in not only the history of golf but maybe all sport. Michael Jordan called it the “greatest comeback I’ve ever seen.” That’s good enough for me. Tiger managed the course, and his strokes, better than the long hitters.  He knew how to get where he wanted to go on the prettiest patch of green this side of heaven.

It was his fifteenth major victory and talk has now resuscitated of him breaking the all-time record of eighteen majors set by Jack Nicklaus.

Tiger may win again but I wouldn’t be at all surprised if this was the last one. The Westgate Super Book in Vegas has him 2-1 to win one more major but 20-1 against him passing Jack.  That number was 150-1 against before the Masters victory.  I think 20-1 is way too short. He won’t surpass or even tie Nicklaus’ mark.  At Tiger’s age the clock will strike twelve before the major trophies add up to eighteen.

However, if he breaks the all-time record, I fully expect J.J. Steinhoff to republish this Sunday Morning Coffee.

And, as soon as he does, you can fully expect me to unfriend him.

That’s if I remember.