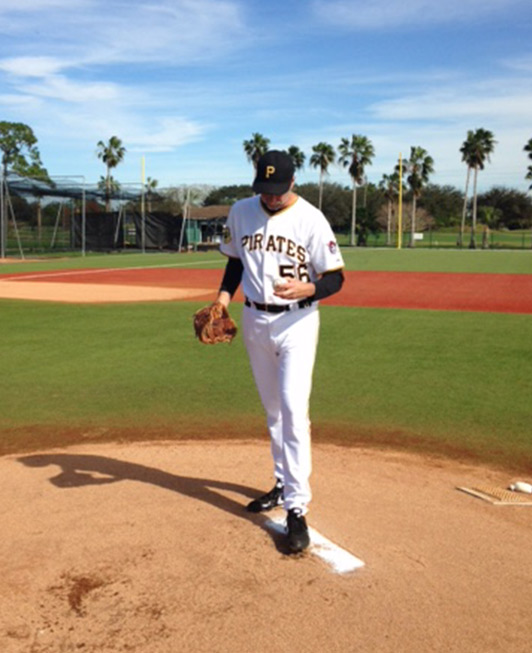 Last Friday, the day before I left for Pirates camp, I finished my final pre-camp workout with my Birmingham baseball guru Jarrod Patterson. The former Tiger and Royal said he wanted two things from me at my fifth Pirates week: to give pitching a try and to hit a triple.

Considering I’ve never done either, and it might be physically impossible for me to run from home to third without taking a cab, I explanied to JP the reality of the demand: Rand Paul had a better chance of becoming President of the United States than I had to either pitch or hit a three bagger.

This morning while I’m not sure if Iowa is going to turn for Paul on Monday or not, but it doesn’t matter. Friday, as camp ended, I pitched and hit a triple.

Before the game that mattered to no one, I said ‘what-the-heck’ and told our manager 1990 Cy Young Award winner Doug Drabek and our coach, 1992 Gold Glover Jose ‘Chico’ Lind, that I wanted to pitch to one batter in our finale. Fortunately I told them before lunch or it would have come right back up. Drabek, ever so reassuring, said, “I don’t give a shit, do what you want to do.” Lind just laughed. After they realized I was serious, I then suggested I start the game against the only winless team in camp and right after what I figured to be four pitches and a sure walk, I would go back to first base so they could put our regular starter John Chuprinko into the game. For some reason they agreed.

Pre-game, as we were taking swings in the batting cages, Pirates stud Andrew McCutchen, settled into a spot next to us. The sound of the ball coming off his bat and ours wasn’t remotely similar. It was like a jackhammer compared to the proverbial pin dropping. I thought about asking Cutch to play for our banged-up team but with steady John Beran patrolling the outfield, I took a pass on the 2013 National League Most Valuable Player.

Even though we had won one game and the other guys were winless, there was still a little pride on the line as the rain finally stopped on a beautiful but chilly Bradenton, FL day. Once word circulated in baseball circles that I would be the starting pitcher, I understand red lights started flashing and alarms ringing in Las Vegas and they promptly took our game off the betting board. The sharps figured something was very amiss.

Drabek, who went 22-6 in 1990 and now is a pitching coach in the Arizona Diamondbacks organization, took me to the bullpen and tried to give me a few pointers, as if I understood what he was telling me. Then in the next breath he told Chuprinko to “get loose because you’ll probably be coming in quicker than you think.” I assured him no matter what happened, I was only going to face one batter so I couldn’t put us in too much of a hole.

As the home team, I trotted out to the mound in my Pirates white jersey for the first time in my life. In sixty-three years, I’ve never pitched before. Ever. As camp buddy and Friday’s opponent Randy Stear, after doing some quick math said, ” I figure you are pitching on over 23,000 days of rest, so you should be fairly sharp.”

Drabek asked me if I was nervous. I told him actually I was. I just didn’t want to make a fool out of myself, which I normally can do without a baseball in my hands. Walking to the plate to lead off the game, and be my only hitter, was the one guy who had more at-bats than anyone ever in Pirates camp history, Glenn Merlin, who is at his twenty-four straight fantasy week. I asked him to be gentle with me.

The umpire yelled play ball and I toed the rubber. I never toed a rubber before. I knew a rubber could be used for many differing things but I’m not sure I ever knew you could toe one. I took a deep breath. I did hear some ‘Come on, Roy’s’ from my infielders. I leaned back and threw my heater. A forty mile an hour fastball doesn’t register on the radar gun, but it eventually got there. “Strike one,” yelled the man in blue behind catcher Matt Jameson who told me to aim for his glove. It actually was a good pitch. For a split-second I considered pulling a George Costanza, saying “that’s it, I’m out of here” and walking off. I decided to stay.

The second pitch was pretty much the same as the first, but this time Merlin swung and hit it right back to me. I fielded it on one hop, took three steps toward first and tossed it over for the out That was it. I jogged to the dugout, switched gloves, and went out to first base. I went into the camp history books with a third of an inning pitched, two strikes and one out. I didn’t feel the need to have my arm iced like these wussies on television. I’m also not sure why everyone makes a big deal out of how hard it is to pitch. My ERA is now 0.00. Clearly it isn’t that difficult.

The other team, managed by Grant Jackson and Rennie Stennett, gigged and wanted to know if Drabek had me on a pitch-count. Or if I was on a short-leash. I took the ribbing, but neither Drabek nor Jackson, ex-big leaguer hurlers, ever had a better career outing than I just did. I never threw a ball; only strikes.

Rand Paul’s chances got better in the bottom of the second when we trailed 2-0. Runners on first and second with San Antonio’s fifty-three year old Dale Dmitrzak on the mound. He throws even harder than me. Dale got ahead with two quick strikes and then wasted two pitches. His fifth pitch was the longest ball I hit in many, many years, a blast over Dave Zacur’s head in right field. I got all of it. The ball rolled all the way back to the fence, 335 feet away. Camp good guy Ty Smith sat on the metal bleachers and watched with amazement. As I got to second, I never even looked at the ball but instead JP’s wish for a triple stuck in my head. I turned and headed for third. I huffed and I puffed. Damn, that was a schlep, but I got there without a throw. Obviously the two runners ahead of me scored to tie the game at 2-2. One batter later I scored what proved to be the winning run in our 7-2 rout, giving us our second win in six games.

So, much like a birdie on the 18th hole, it’s days like this, doing something that you thought was impossible that keeps the ninety-six of us coming back. The candle still burns and dreams and fantasies can become reality. Even Rand Paul probably thinks he still has a chance.

Camp ended Friday night with the closing festivities which included honoring the five year attendees for their longevity. As a reward, fourteen us of were presented with a coveted Pirates jacket, signaling not only that your body has been able to withstand this punishment for a week, but you’ve also spend a boatload of money to get it. I figure the jacket cost me about $18,000 in camp fees over the five years.

Not only is my week complete, but so is my Valentine’s Day shopping!