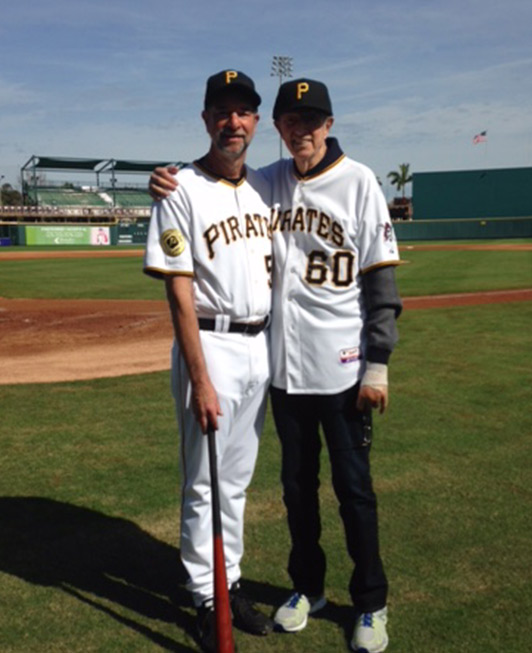 The setting and script was Hollywood perfect.

Bases loaded. Two out. Top of the last inning. Down a run. The count runs full. The sixty-three year old first baseman is at the plate. He’s been here before, about fifteen months earlier, and delivered.

The weather was Bradenton, FL seventy degree delightful. The setting absolutely picturesque. McKechnie Field, in downtown Bradenton, has hosted baseball since the gates first opened in 1923, ninety-three years ago.

The Pittsburgh Pirates have called it their spring home since 1969. Roberto Clemente and Willie Stargell have played here. So have opponents like Willie Mays, Sandy Koufax and Hank Aaron. Roy Berger’s played here four times, too.

But Tuesday was different kind of perfect day. McKechnie Field seats 8,500 baseball lovers. On Tuesday there were still about 8,480 good seats remaining as our Pirates fantasy camp game started thirty minutes before noon.

However the most important seat in the joint, to me, was occupied by the eighty-seven year old father of the now nervous first baseman at-bat.

Today was the first time since 1964 my dad watched me play a baseball game. Yes, we both may beyond our baseball primes, but the day was still incredibly important and emotional to me.

Herb Berger figured it was about time he ventured four hours across the state from his Fort Lauderdale area home to see for himself what my baseball life renaissance, he has read and heard about incessantly for the past six years, was really all about.

NInety minutes earlier we lead the game 9-2, but I had a feeling it wouldn’t hold. The guys we played scored over forty runs in two games on Monday, so it was just a matter of time before they broke out. We, on the other hand, had won one of our previous three games. On cue, they rallied to take a 14-12 lead to the top of the seventh, the last inning. We got one back before opposing manager, Bruce Kison, a 115 game winner in the big leagues, strolled to the mound and made a pitching change.

He brought in thirty-two year old Lance Gillespie, who stands all of six-five and has a body to match. He’s the son-in-law of camp veteran Bill Sirakos. Gillespie struck out good guy John Beran swinging for the second out.

In November, 2014, with a game on the line wearing Yankees camp pinstripes, I delivered in almost the same situation with a bases-loaded game winning single to beat the undefeated defending camp champs. I was pretty much certain then, the same situation wouldn’t play itself out again in my lifetime.

But here we were on Tuesday. As the visiting team, the other guys still had an at-bat, so no matter the heroics, it wouldn’t be a walk-off.

As I walked to the plate and the PA announcer called my name, Gillespie didn’t look fazed in the least. I cleared the dirt from the batter’s box and tried to get my knees to stop knocking. I knew whatever hope we had to beat the division leaders was on my bamboo bat. I dug in and looked at Gillespie. Giving away thirty-one years, I was clearly overmatched by the good looking kid. At that moment, only sixty feet, six inches away, he looked like a combination of past intimidating hard throwers Bob Gibson, Don Drysdale and Herman Munster.

I was determined to do whatever it took to get the tying run in from third. If I needed to get hit by a pitch, I would. It already happened twice this week. A base-on-balls would be a little less painful; a base hit more of the dream continuing.

Somehow I worked the count full. The kid threw hard. Probably in the sixties. I didn’t look at my dad, sitting about four rows behind the plate. I just wanted to deliver for both of us.

We had been out there for almost two and a half hours. The cafeteria at camp closed at two o’clock It was ten past two already and everyone was hungry and getting grumpy. But if there was a way I could tie the game and keep it going, I really didn’t give a damn about lunch.

Gillespie’s sixth pitch, on the full count, was high and tight. If I tried to swing at it, I would have been so jammed up, I would have looked like I was tied to a pole. As I got ready to take the game tying walk and toss the bat and run to first, the diminutive umpire behind the plate, who doesn’t get paid overtime, yelled, “Strike three!” I couldn’t believe it! Nor could my team. I lost my cool for about three seconds and yelled something to him I wish I didn’t. What I should have said was ‘It may be fantasy camp but that doesn’t mean you have to call fantasy strikes’ or ‘ We all paid four grand for this experience, so give us a fair shake.’ But I said something else, that I probably shouldn’t have in the heat of the experience. After the game, opposing manager Kison pulled me aside and said, in essence, ‘next time you get punched out, at least hope it’s a strike.’

But you know what? Other than letting my teammates down, and our third loss in four games, it really didn’t matter. What does matter is my dad was here, watching me play for the first time since he coached me in 1964 when I was twelve. He’s the reason I’m a Pirates fan. Somehow, despite growing up in New York City, he took a shine to the Pirates. As they say in Birmingham, ‘I got it honest’. I became a Pirates fan too and we celebrated the 1960 World Series championship with a hug on our Long Island driveway after Bill Mazeroski won it for us. I am at Pirates camp for the last five years because of him.

What a difference, however, a couple of hours in a ballgame makes. In the top of the first inning, I was up at-bat also with the bases loaded. David Merison may not the hardest thrower in camp, but he finds the strike zone almost every time. I stroked his second pitch into right field for an RBI single. With my dad sitting there, damn that felt good! As shortstop Keith Bertetto took the relay from the outfield and was getting ready to throw it back to Merison, I asked them for the ball. I gave it to first base coach Edgar Varela, our staff assistant who manages the Pirates rookie league team in Bristol, TN during the season, to hold for me.

When the inning ended, I took the ball and brought it to my dad. It’s his fault I’m here this week.

I said to myself at the time, no matter what else happens today, nothing can be better than that moment. I am really fortunate. Not many sixty-three year old kids get their eighty-seven year old dad to watch them play baseball, dressed in a team uniform they jointed loved fifty-five years ago, in a beautiful ballpark that will be filled by major leaguers in about three weeks.