One Minute; One Week 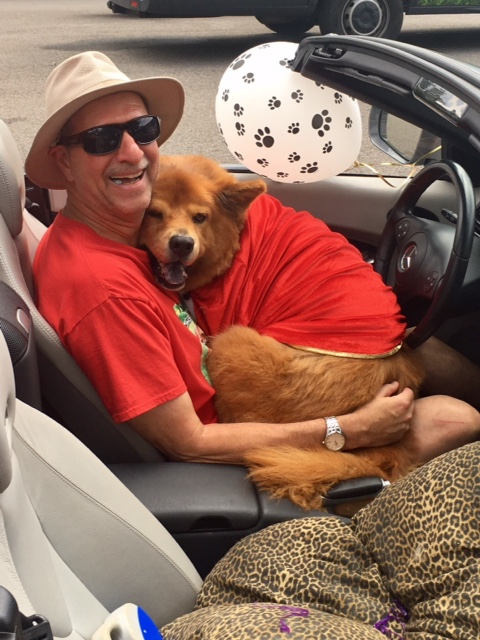 Where does time go?

One minute you enter the world on a rainy 1952 Tuesday afternoon in the Bronx and the next you are turning 65 on a sunny Saturday in Birmingham, Alabama.

One minute you’ve never touched a dog in your life and some sixty-five years later YOUR dog (and best pal) is selected royalty.

One minute, in 1968, your high school baseball coach tells you he doesn’t need your services. Thirty-nine years later, a major New York daily is calling your baseball work a “home run.”

One minute your kids are born, the next they are 36 and 33, successful in two diverse California occupations and in Alabama for a weekend to celebrate your eligibility for Medicare.

One minute you tell Andi it’s okay to go the Greater Birmingham Humane Society to look at dogs, but there is no way you’ll bring one home. You are only looking. You’ve had one pet in your life, Sammy the parakeet, accidentally frozen to death by your mother in 1962 in front of a wall-unit air conditioner.

That one minute, in 2009, you pin yourself up against a wall at the humane society as Andi plays with a three-month old chestnut chow/retriever mix named Yogi. He comes over to you and you cling to the wall like the executioner just arrived. You tell your wife you can’t do this and leave.

One minute you are fast asleep, the next morning you awake and feel like shit for what you did to Andi and Yogi the afternoon before. So you tell her it’s okay to go get him as long as you can name him.

The next minute you propose the name “Go Away” and she denies it. The next you propose “Asshole” and she says we already have one in the house. You then retort with the mascot of your alma mater, Ibis, and Yogi is called that forevermore.

One minute you and the new puppy Ibis don’t get along and Andi sends you both to companionship training for six weeks. She doesn’t know you always have a stack of treats in your pocket. Six weeks later the two of you are inseparable, forevermore.

The King turns out to be a 100 lb. chicken when the band starts to play

For over 33 million minutes – 63 year’s worth – you pay no attention to the Greater Birmingham Humane Society; the next minute you are serving on the GBHS Board of Directors. As the CEO Allison Black Cornelius says two years later, when you tell her this experience truly changed your life, “it’s because it balances you.” She hit it on the sweet spot.

One minute you are a one-dog household then you go away for a week and come home to a four-month who looks just like Ibis and is appropriately named Deuce. He’s part chow, part nuts. Andi said she was just “fostering” him. You officially adopt him a week later and vow to yourself you’ll never leave home again.

Forty-three thousand minutes, one month ago, the GBHS Auxiliary asks you to enter Ibis as King of Do Dah Day, Birmingham’s celebration of pets and the longest running festival in the community. You can’t say no. He ran on the plagiarized but previously successful campaign of “great people, tremendous deals and let’s make Do Dah Day great again!”

Six thousand minutes, or four nights ago, Ibis is announced as the 38th King of Do Dah Day in a landslide victory. Dollars are votes: Ibis got over 55% of the total votes cast for the 11 entries, which means we contributed more than 55% of all the monies raised. That’s a pretty impressive support network. Andi finally gets her wish: to live with royalty. The best she had before was just roy. 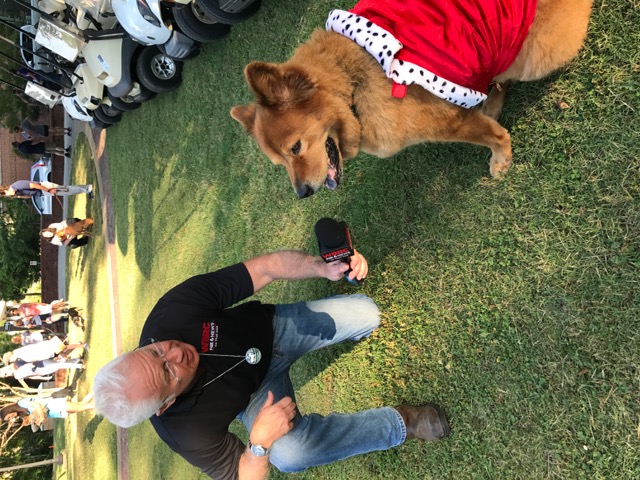 Two days ago Ibis is officially introduced to the public on local television as the King of the weekend. One minute you’re the spokesperson for your company; the next, you’re the press secretary for your dog.

One minute you are taking your pre-teen kids to see the Macy’s Thanksgiving Day parade and watching from a luxury apartment on Central Park West. The next, you are driving His Honor in the lead car of the Do Dah Day parade down Birmingham’s Highland Avenue in 200% humidity. 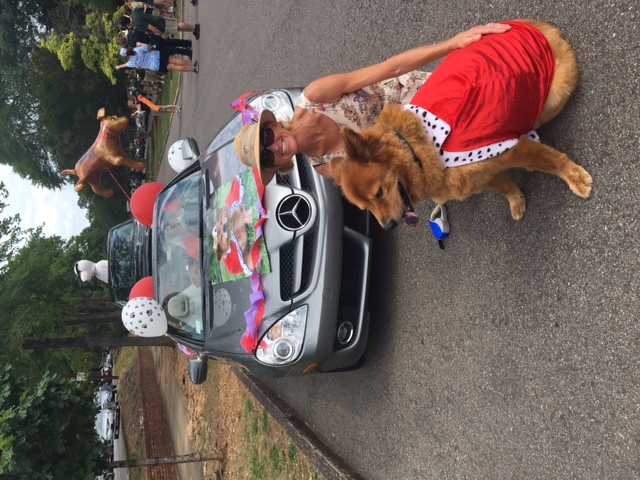 Andi gets His Honor ready for his Royal ride

Fittingly, Deuce was his Court Jester. While maybe it didn’t have the pomp of the processional a few hours earlier in Riyadh, I guarantee we, and the thousands gathered along the route, had a hell of a lot more fun than Melania did.

Forty-two years after being told you’re not good enough to play high school baseball with the other kids, you suit up in a major league uniform at a Major League fantasy camp. Some of your ex-heroes are your coaches and now contemporaries. You are only going to do this once. November will be your 11th camp.

Four years after that, you publish a book about your baseball camp experiences called The Most Wonderful Week of the Year. It becomes a best seller among your close friends and even closer relatives. You promise yourself you will never write again.

Two weeks ago your second book, the one you promised yourself you wouldn’t write – Big League Dream – hits the market. It’s the story of the millions of kids like me who grew up dreaming about playing baseball for a living and those special few who actually did it. You make sure you put the book’s website- bigleaguedream.com- in this writing. You might actually sell one. 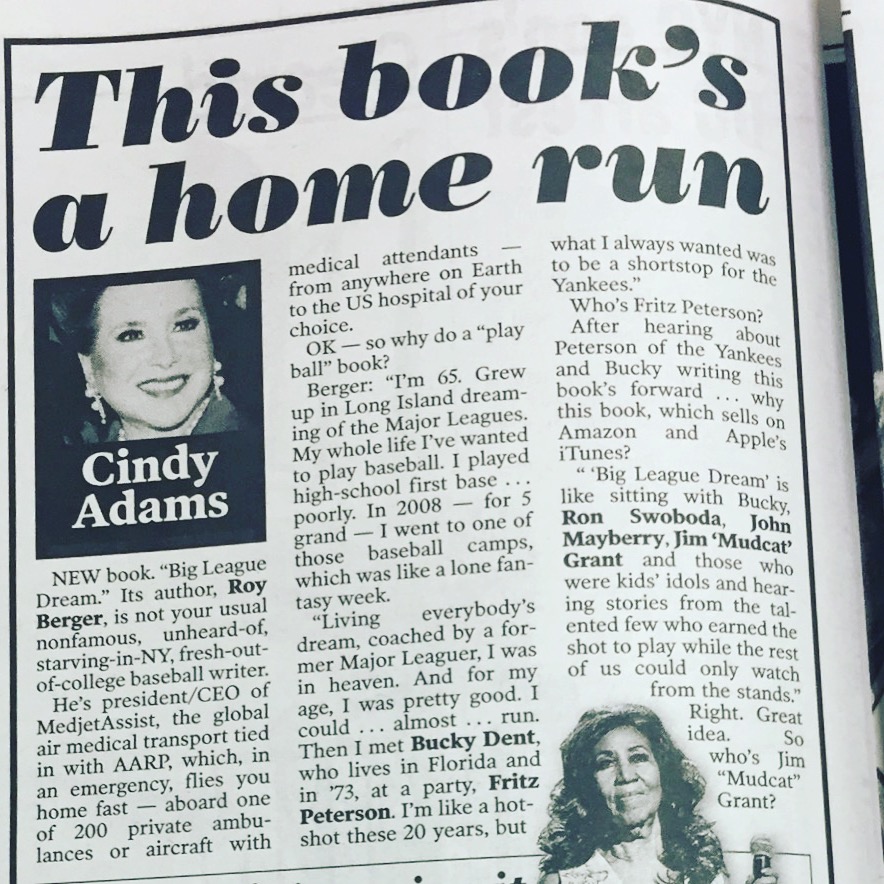 Five days ago, Cindy Adams, the madame of society newspaper columnists, calls your book a “home run” in the New York Post, the paper you read as a kid. Pinch me please.

Three days ago, Yankees hero and Red Sox nemesis Bucky Dent texts you a picture of him reading the book. 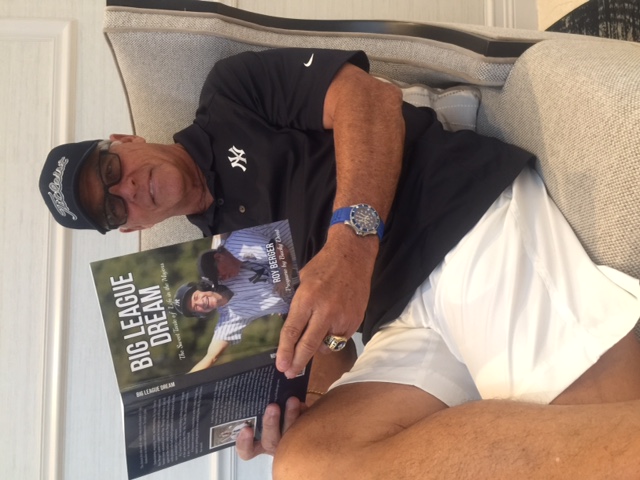 Bucky Dent relaxes with his copy of Big League Dream

Mr. Dent was kind enough to write the book’s Foreword. Promise not to wake me if this is a dream.

The same day, the dean of travel journalists wants to know if you will go on his national radio show to talk about the book. The same night, one of the most respected travel bloggers in the country drops you a note to tell you she bought Big League Dream as a Father’s Day gift for her husband. Very flattering.

Saturday morning you awake to an email blast sent by the Yankees to their entire camp data base recommending the book. Lovely.

In your 3,383 week of minutes, you have the crowning of a King, widespread public acceptance of your book, and it was a pretty darn good business week for Medjet too.

Where does time go? One minute you’re here, the next …………

Minutes move really fast; weeks do, too. Take a breath. Don’t take anything or anyone for granted. Enjoy yourself today.