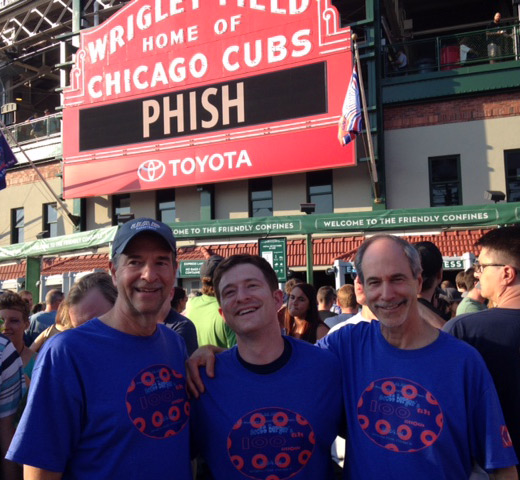 Scott Berger has done us proud. In every Jewish parents life there are many mitzvahs, celebratory events, as we call them. High school graduation; college graduation; a career job; if you get lucky maybe an engagement, wedding and grandkids. And of course their Bar or Bat Mitzvah. But the biggie, the mitzvah of all mitzvah’s, was Friday night at Wrigley Field in Chicago: Phish concert #100. Put it in the books- many strive but very few succeed!

For you squares, not as hip as me, Phish is the millennial’s Grateful Dead. They are a bit saner and less raucous than Widespread Panic. Or so I’m told.

For Scott the journey started on September 28, 1999 in Pelham, Alabama. Not that anyone is counting but some 16 years, 17 states, 31 cities, 36 venues and two countries later, the champagne spilled on the field of the friendly confines where the Cubs have never won a World Series and tasted the bubbly themselves. Harry Carey, Ron Santo and Ernie Banks rolled over.

Though for a baseball purist like me it might have been a terrible use of a pretty ballpark, it was a great night anyway.

Scott’s uncle Mike, who doubles as my brother, joined us from New Jersey, lured not by Trey Anasthesia but by the promise of a Saturday night dinner at Gibson’s. However Scott will bypass the wedge and filet to return to Wrigley for #101 tonight (and #102 Monday in Indy.)

Mike’s seatmates on the Friday morning flight from Newark to Chicago, Angie and Birdman, made Scott seem like a rank rookie. Friday night was Birdman’s 107 Phish event to go with 296 Grateful Dead’s and 178 Dave Mathews Band jams. I think the Birdman is a bit batty.

Every song Friday night seemed like it lasted 15 minutes (because it did), and everybody but arguably the two oldest in the crowd of 40,000 knew every note and word. When a song mercifully ended, the next one sounded like the one just finished. The Wrigley air was permeated not by hot dogs and stale beer, but by a very strange aroma that as the night got longer, made things seem more interesting and took my mind momentarily off the Brexit-racked stock market. Scott, who lives in LA, had his traveling posse of 30 Phish regulars from around the country converge on Chicago, all of whom are super guys and gals and most have already passed the century mark themselves.

I am so proud of that kid I could just kvell!