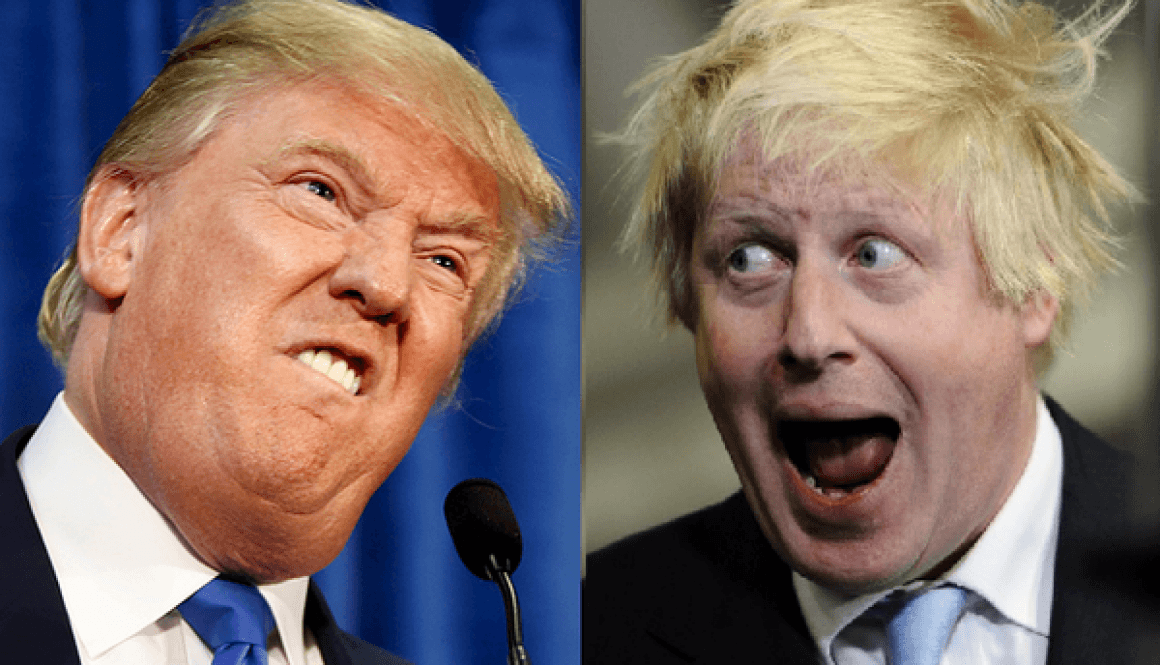 Donald and Little Donald. Is the world ready for this potential political high-wire act?

England swings like a pendulum do…….
When songwriter Roger Miller first penned that back in ’65, a month or two after I could get it on my bar mitzvah playlist, he undoubtedly was referring to groovy Carnaby Street and not Parliament, where Prime Minister Harold Wilson had the House of Lords and Commons under control. To us Stateside kids, Parliament was a brand of cigarette our moms smoked. Who knew or cared about legislative bodies?

Bobbies on bicycles, two by two……….

Last Saturday, while walking the tree-lined Grosvenor Place promenade to Buckingham Palace, there was a loud explosion. Very loud. Stop-in-your-tracks loud. It sounded like a canon blast. With London, the greatest melting pot of civilization in the world, wearing a terrorist’s bulls-eye I said to my colleague Mat Whatley, “I hope that isn’t what I think it is.”

Before leaving home, the question asked me by many in light of the Manchester, London Bridge and Borough Market attacks a few days earlier was: “…are you still going?….do you think it’s safe?…..please be careful.”  In fact, only Andi Berger asked, “Can’t you stay longer than four days?” I never thought of not going. London may be my favorite place in the world, this side of the futon on my Alabama porch. This was my 19th straight year going over in early June, doing business in the Lloyd’s market and a trip I always looked forward to. My business blokes have become friends. Good ones. Terrorists want to change your life. The one thing I never thought about doing was staying home. Yes, we need to be smart and safe, but we can’t let them win by changing our lives.

After the loud blast, Mr. Whatley and I approached two bobbies. Not on bicycles but nonetheless they were two by two. They were calm. We figured we would be, too. Then another boom, followed by thirty-nine more.

It was a 41-cannon salute for Prince Philip’s 96th birthday. His wife, the Queen, is a mere kid of only 91. 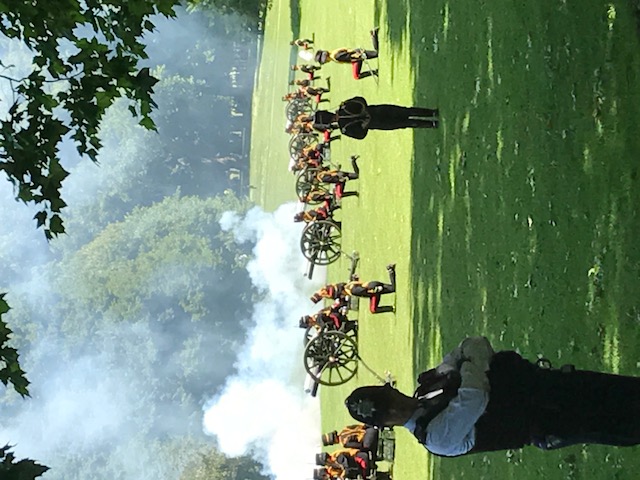 A 41-cannon salute outside of Buckingham Palace.

It’s the same Prince Philip who retired about three months ago. There were thousands and thousands of people milling about the Palace grounds but not one of them could tell me why it was 41 cannons, or what Philip had retired from. He had the best gig in the world; he got to sit in the Royal Box at Wimbledon. I wouldn’t give that up for a crummy Social Security check.

Out the window of my Knightsbridge hotel, I had a wonderful view of both. But what I didn’t get to see was inside the neighboring hallowed halls of Parliament. That’s where the English pendulum swings these days. The action isn’t on Carnaby Street anymore where the King of the Road envisioned it fifty years ago; but instead, inside the chambers of the Lords and Commons. British politics are a mess. And you thought we had troubs?

When I was in London last year, there were two political events that simply couldn’t happen: Brexit couldn’t pass, and Trump couldn’t be elected President. Every cab driver on the queue at Harrod’s was sure of both. But as a result of the surprise succession from the EU Prime Minister David Cameron, who was safely anti-Brexit, was dismissed and sixty-one year old Theresa May was elected by Parliament to become the mothership’s Prime Minister.

Ms. May, who seems like a nice lady but not necessarily one you’d want to be sitting on the next stool at the pub’s closing time, was also anti-Brexit but became the compromise PM as Cameron’s efforts failed.

However, greed catches up to everyone. It caught up with the Seattle Seahawks three years ago in the Super Bowl when they had four cracks from the one yard line to win but got greedy and threw. It caught up with the Atlanta Falcons last year when all they had to do was be conservative, kick a gimme field goal and get fitted for their rings. Both times New England was the beneficiary of the greed.

Ms. May, like Seattle and Atlanta, had everything going her way: a public that was forgiving about her original opposition to Brexit and who by-and-large seemed satisfied with her leadership. She also held the all-important majority in Parliament with her Conservative party holding 350 of the 650 seats. But she wasn’t satisfied. She wanted more. She wanted a super-majority, which virtually gives her legislative carte blanche. She only needed eight more seats. So she got cute like Seattle and cocky like Atlanta. She called for a ‘snap’ election to get the ball into the end zone and get the additional seats she needed to be a virtual czar.

Early polls showed her with a 20 point lead to gain those seats but then Ms. May did something very strange. She disappeared. She didn’t campaign, she didn’t advertise, in fact, she didn’t even @tweet. She channeled her inner Steve Austin and went stone cold. She coughed up a bigger lead than the Falcon. Atlanta led by 25 and blew it. Almost 70% turned out throughout the UK to vote and when it was all tallied, May’s Conservatives, colloquially know as the Tories but no relation to Joe, lost 32 seats and in the process their simple majority. #where’sTheresa?

Though he’s no Tom Brady, Labour Party leader (yes, it’s spelled correctly; they put an extra ‘u’ in abouut everything over there) Jeremy Corbin orchestrated a Bernie Sanders campaign, rallying the young with promises he couldn’t keep while also casting doubt among some of May’s strongest backers. When the final gun sounded, the Tories lost their hold. But there are still sixty independent votes in Parliament and now Ms. May has to serve crumpets to the legislative peasants to try and get back the eight votes she needs to gain the simple majority that she had two weeks ago.

Plain and simple it was nothing but a greed play. British tabloids now call Ms. May a “dead woman walking.” She finally emerged from hiding telling her party that she “got into this mess and I’m the one that will get us out of it.”

Not everyone agrees. If the Tories, no relation to Joe, can gain eight friends, they can oust her and vote in a new Prime Minister. Can you imagine if we had that little gimmick over here? British protocol says the Queen would have to bless the new leader, but that’s a formality much like the Warriors having to play 82 regular season games so they can run through 16 more in the playoffs. The Queen would probably welcome the distraction as a retired Philip is no doubt driving her nuts around the Palace. What did he retire from, anyway?

However Theresa just May have time on her side. You’d think the longer the Tories, still no relation to Joe, let her stay, and she can “get out of it”, there may be life in the old gal after all. Or maybe she’s toast, oops an English Muffin. A burnt one.

But what happens if she gets the boot? Who will benefit from her greed? The two names bandied about in cabs and newspapers are David Davis, the leader of the Brexit transition and Boris Johnson.

Who’s Boris Johnson? He’s the ex-Mayor of London now sitting in May’s cabinet as Foreign Secretary. According to the tabloids he has interest in the gig. Our London cabbie last week called him “a clown.” Looks-wise he can easily pass as Mr. Trump’s kid brother, Little Donald. The Brits use one word to describe Big Donald: “interesting.” Can you imagine the two Donald’s carrying-on late at night at summit meetings in the Marriott lounge?

It would give us a one-two political act not seen since Churchill and FDR in the 40s. The difference, of course, is those two were esteemed and played in the world’s center ring. No doubt the Flyin’ Donald Brothers would be relegated to a sideshow. But as our Donald would say, “Believe me, it would be the greatest sideshow you ever saw. Believe me.” 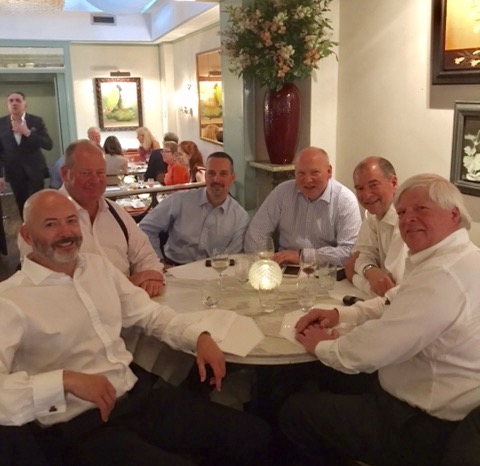 Talking business, politics and Chelsea football at Daphne’s in London with my British blokes- Matt Webb, Shaun Scade and Charlie Boyd along with Medjet colleagues John Gobbels and Mat Whatley.

Violence, terror, murder, political mayhem and now fire have spread havoc on one of the world’s finest places. Maybe even THE finest. Now, all Londoners want is a chance once again to see “the rosy red cheeks of the little children.”

We can hope, anyway.