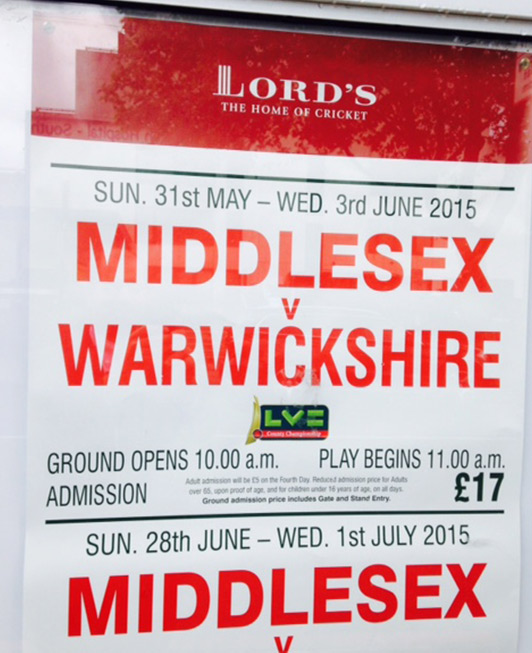 If you think baseball is slow, take a gander at cricket.

Baseball is the excitement equivalent of a two-man advantage power play in overtime of the seventh game of the Stanley Cup Finals; it’s a goal line stand up by six with 10 seconds on the clock; it’s a LeBron three pointer from the corner down by two as the buzzer blows; it’s even a 89th minute penalty kick in soccer.

Put it this way. In my life I never had a scone and tea at 4 pm. I really don’t care for tea. Today, I couldn’t wait to get it. At least it was some afternoon excitement.

The venue was the 200 year-old Lord’s Cricket Grounds on London’s west end to watch host Middlesex play Warwickshire in County Championship cricket play, which I’m told is equal to our major league baseball level. It was the famed exclusive Lord’s Clubhouse where ‘dressing smart’ is compulsory for entrance. I was joined by my British hosts Matt Webb and William Waddell-Dudley, the Club member. ‘Smart’ dress was clearly defined as shirt, tie, jacket, smart trousers and smart shoes. In other words, idiots need not apply.

I rooted for Middlesex because I can’t pronounce Warwickshire. Chanting their hymns was never a consideration. Middlesex never made it to bat while I was there. It was the first of a four day, two inning match so I figure by Tuesday they’ll get a chance. Fortunately my flight home leaves that morning.

Sunday, Lord’s had all the feel of the Marlins and Rays on a scintillating Wednesday afternoon in Tampa.

I now know all about wickets, overs, batsman and bowlers. After Wickenshire scored their 86th run, a bell rang and a 20 minute tea break was in order for both teams. Some things you just can’t make up. The bell woke-up most of the 200 spectators in the 28,000 seat stadium. Earlier, the start of play was delayed by four hours because of weather. Unfortunately it stopped raining. That combined with blustery temperatures in the high 40’s and England playing New Zealand on the telly in international cricket, didn’t encourage leaving your flat.

I’ve been known for quick exits but there was no way I was going to miss my first lifetime 100 run inning. I’ve had a few that came close at fantasy camps but when Warwickshire posted 101 with seven batsman remaining in the first, I called it a day. They get either 10 batsman or 300 pitches to score as much as they can. That’s more pitches than Bartolo Colon throws in a week. I had Middlesex plus 90, which didn’t endear me either.

There was good news however. I came back to my room and tossed all my Tylenol PM’s and Ambien in the trash. From now on, I will pop in my new DVD- ‘The Best of County Cricket’ and I’m gone.