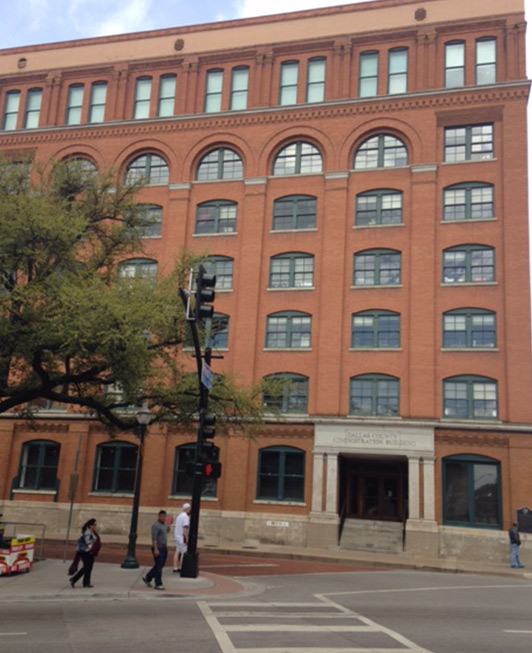 I expected the moment to be surreal, impactful, powerful and sentimental. After all, I’ve carried the vivid memory of it with me for more than 52 years. Finally, I anticipated seeing it all unfold right in front of me.

My generation will never forget where we were and what we were doing on November 22, 1963 when President John F. Kennedy was killed. Though the anniversary date has largely been forgotten, save for a couple of us who note it annually in this space, the moment, the weekend, and the memory still burns for me – same as the eternal flame on JFK’s Arlington grave.

Wednesday in Dallas, with the day free before an evening appointment, was finally going to be my chance to visit the assassination setting, which I have to admit as an impressionable 11 year old, still haunts me.

November 22, 1963 was the first impactful event in our ‘boomer’ lives that literally changed the world. After JFK’s murder anything was possible. It was the first coining of what has become the most overused phrase in sports- ‘shock the world’. Lee Harvey Oswald shocked the world. I understand to today’s youth it’s not quite the ‘shock the world’ degree of Middle Tennessee State beating Michigan State, but close.

You can’t help but wonder if JFK had lived what would have been the ultimate fates of Martin Luther King Jr. and Bobby Kennedy? Without the JFK murder model and the gunning down of Oswald on live TV two days later, would the copycat assassins been motivated to kill? What would have happened in Viet Nam and to civil rights if JFK lived and Lyndon Johnson remained second fiddle, which he seemed better suited for? Would Bobby Kennedy have succeeded his brother as President in 1968 thus denying us Richard Nixon and Watergate? What would the Smothers’ Brothers and Rowan & Martin done for material without Nixon? In some way, the lineage of the violence of the assassination, and the world changing events that succeeded, probably can be finely traced to 9/11, Paris and Brussels.

I expected the Dallas setting, when I got there, to be so much grander. My minds-eye for half a century saw it on a very big stage. After all, it was the main historical event of life for my generation. I expected to walk up on it and be wowed. Maybe a little misty too. It was a setting I’ve seen over and over and over in my mind through 52 years.

My generation all has a JFK assassination memory. I was in the sixth grade. We found out about the shooting through something called a ‘loudspeaker’ from the school principal. I remember everything about that Friday and the weekend that followed. The only thing I really recall in life events before that was Bill Mazeroski’s home run to beat the Yankees in the World Series three years earlier, but Walter Cronkite wasn’t chain smoking telling us about it for a non-stop 72 hours. We were shook a year earlier by the Cuban Missle Crisis but I doubt kids our age really understood the magnitude of the issue and threat. We didn’t worry about it however because we knew President Kennedy would handle it for us. I guess we were living in Camelot but didn’t know it until it was gone.

The Texas School Book Depository is now the Dallas County Administration building. They took paradise and put up a parking lot. The only indication you get walking up Elm Street that you’re approaching are signs for “The Sixth Floor Museum at Dealy Plaza.” Before leaving my hotel, I asked the staff the best way to get to Dealy Plaza, the much publicized area surrounding the building. They never heard of it.

I finally got to the Book Depository building and the various assassination gift shops attached but walked straight to neighboring Dealy Plaza; onto the same spot Abraham Zapruder stood when he took his video. Then a few yards over to the ‘Grassy Knoll’ where conspiracy theorists maintain there was a second shooter. Not on Wednesday there wasn’t. I was the only one there.

However, there were plenty of ‘tour guides’, who for cash, will tell you what happened that day and all the supposed intricate details. These hucksters were born at least 30 years afterwards and very few in the United States

There are two marked ‘X’s’ on Elm Street, the first indicating the spot JFK’s limo was when the first shots were fired; the second noting where Oswald hit his target. As I stood there none of it brought back the emotion I expected. I was really disappointed.

I crossed Elm to look at the very famous facade of the School Book Depository errr Dallas County Administration building. Still the familiar reddish-brown hue. The sixth floor window, Oswald’s perch, is very visible but maturing trees cover up a good portion of the rest.

I paid the $16 to go up to the Sixth Floor and take the audio tour. There were probably a couple hundred others up there as well; maybe a half of dozen of whom could remember 1963. The tour, if done fully, is also a 1960s history and culture lesson. You know you’re getting old when history is no longer history, but part of your life portfolio.

From the inside, Oswald’s window is now glass encased with text book boxes piled high illustrating both his hiding place and the base use to steady his rifle. I didn’t feel what I thought I would with the commercialization of the whole setting. It felt like a studio set in Hollywood.

You can go up to the seventh floor and take pictures from the window right above Oswald’s sight-line. There were two or three of us that found that of interest.

I left the building probably a little quicker than I thought I might. I wanted to go back to Dealy Plaza one more time and try to absorb what I missed. Now it was crowded with teenagers and tourists from around the world. Others did their daily business passing through, what to me, is the most memorable piece of real estate in my lifetime.

As I was standing there, a 30-something hawker, waving a ‘Kennedy Killed” faux-newspaper headline approached and asked ” How would you like to hear the story of the assassination?”

I looked at him and smiled. I couldn’t help myself and said, “How about I tell you.”

He took his souvenir kit and walked away.